When the X case emerged in 1992 I had no hesitation in taking to the streets on marches to support her right to travel for an abortion. She had enough to cope with after her rape trauma without being forced to carry the child of her perpetrator. I know because I was raped while still in primary school and know what a struggle it is to cope with the aftermath.

By 1992 I was the mother of 4 children, 2 girls and 2 boys. I know what I would have done in the course of my daughter’s lives if they became pregnant as a result of rape. But then I had the knowledge & wherewithal to travel which poorer families don’t have.

The circumstances of: The death in a Drogheda hospital of Sheila Hodgers. The death of cancer victim Michelle Harte after she was refused an abortion in a Cork hospital. The death of Savita Halappanavar. The recent case of Ms Y. The tragic cases of parents who discover their babies will not survive outside the womb and the realisation that 12 women a day who travel to England for an abortion have all shocked me in to action.

Ireland does not have a good record on how it treats its women. It is time to make our voices heard & fight for proper health care for women with crisis pregnancies in patriarchal Ireland. 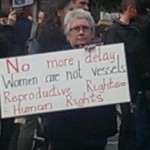