Why I’m Marching: This year, we have something to celebrate

As we do every year, we’ve been asking you to tell us why you are marching in this year’s March for Choice on the 29th of September. Richael is a self-described “serial activist” and current convener of Mayo Pro-Choice. Here, she tells us why the March for Choice is important to her. 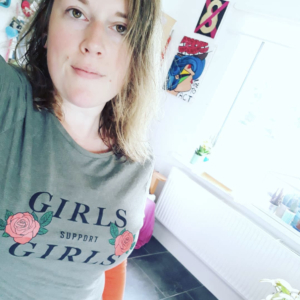 I have always been an activist. I think it’s incredibly important to be engaged and tuned in with what’s happening around you politically and socially.

During college, I was horrified at the apathy around the proposal of bringing in fees. No one from my campus came to the March with me because we were in our final year and “it wouldn’t affect” them. Well it did, because being a newly qualified artist at the beginning of a recession means you’re probably going back to college. Would an extra busload of students from Galway have made a difference? Probably not. But if everyone saw the value of education, downed tools and took to the streets, well it might have.

This is my second March for Choice. I’m marching because, even though we repealed the 8th, there’s still 9 people a day leaving Ireland to access abortion services oversees, and another 3 taking illegal pills at home, often in secret, with no medical supervision.

I’m marching, because I want the government to come back from their holidays and realise that we are still here. We didn’t take a holiday. There is still so much education that needs to be done around this issue.

One of the missed opportunities after YesEquality was that everyone celebrated, and thought “Yay, we can get married now!”, “Yay, everyone accepts us now!”. But there was no follow through. The groups across the country disbanded, thinking the job was done, when really, that should have been the start. LGBTQ+ people are still finding it difficult to come out. There is still a huge amount of homophobia and ignorance around trans and nonbinary folk. I don’t want that to happen to us.

I’m marching to put the pressure on. If my doctor in my little Mayo town can have decent abortion aftercare pamphlets, then the government can step it up a gear, or 12! The longer this drags on, the more people will be forced to travel. You need only read the “In Her Shoes” stories to feel the damage that causes.

The March for Choice is an opportunity to see old friends, make new ones, and strengthen the ties that bind us together. To spend a few hours with thousands of people who all feel the same way as I do, is incredibly exciting and gives me the energy to keep fighting. Knowing we are all in this together. This year, we have something to celebrate, and I can’t wait!