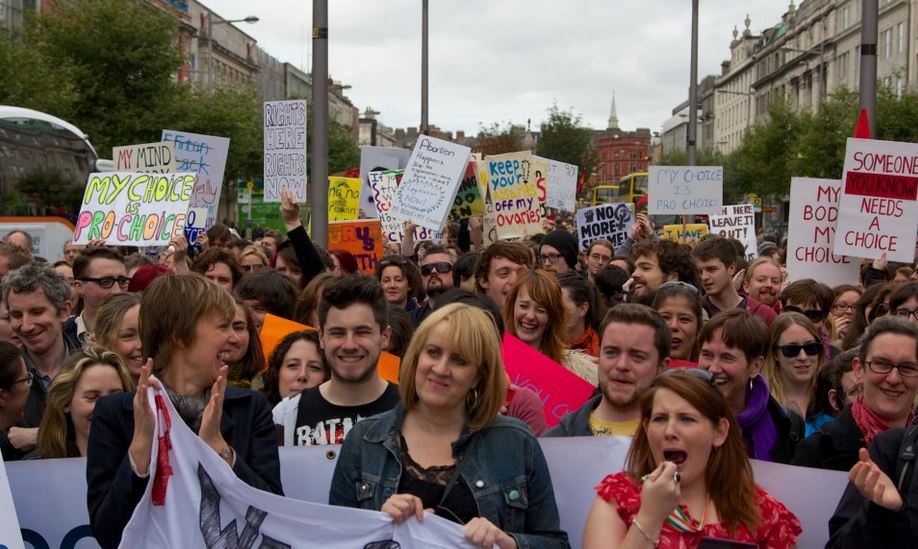 This week the Abortion Rights Campaign have been highlighting how important it is to talk about choice; to loved ones, to political representatives and medical professionals. The aim of this series of ‘Talk about Choice’ posts has been to counteract the silence and the stigma that has traditionally surrounded abortion in Irish society. ARC has summarised some of these thoughts about how to talk to family and friends and representatives below.

1. Invite your Parents to the March for Choice!

For some, talking with your parents about abortion is not an easy topic, so we have some ideas for how to start the conversation: You can tell them that you march because you believe that you should be able to make decisions about your health and your life and to do so with support. You can tell them you’re worried that getting pregnant in Ireland means leaving your life and health to the whims of others. Ask your parents to march with you because they fought hard to bring you into the world, and you value that effort and think it should only be done by choice!

2. Invite Your Partner to the March For Choice!

It may be a conversation that you have all the time or one never thought to have directly before, but as the March for Choice approaches now might be a good time to talk to your partner about choice. You could talk about the choices you want to have available to you if you or your partner became pregnant, including what would happens if complications arose in a wanted pregnancy. You might discuss about how no birth control is totally failsafe or how non-scientific and control-focused, even the mildest anti-choice rhetoric is. You could ask them if they have signed the petition to repeal the 8th Amendment. – You could invite your partner to come with you to the March for Choice and also to the afterparty, where both of you can have a great time and celebrate the campaign for choice!

3. Invite Your Colleagues and Classmates to the March For Choice!

This is a good week to talk to your colleagues or classmates about why you will be Marching for Choice and what it means for women; outside of the negative scare-mongering rhetoric that stops people from speaking freely about abortion.

You could talk to them about their experience of 1983 when the 8th amendment was introduced in Ireland and the changes Ireland has experienced since that time. You could talk about the meaning of ‘choice’; a word respecting all viewpoints on abortion as a personal issue for people in Ireland and their families. You could talk about how no woman in Ireland has the final say on their healthcare during pregnancy and that the state always has the last word on treatment for pregnant women, regardless of any circumstances. – Most of all you can tell them your personal story about why choice matters to you and what your banner will say next Saturday!

4. Invite your TD to the March for Choice!

Do you know where your local TDs stand on the 8th amendment to the Irish Constitution? More importantly – do they know that you are a pro-choice voter who believes that it is a woman’s right to choose?

You could talk about the media representation of abortion and pro-choice views: not those of an extreme minority, but of the vast MAJORITY of people in Ireland who want to leave healthcare decisions up to the individual not the state You could talk about how abortion in Ireland is a reality for thousands of people who have travelled abroad, men and women, because successive Irish governments refuse to honour their duty of care to women You could talk about the social injustice of the current abortion regime in Ireland whereby the need to travel to another state and to pay for services abroad acts as a barrier to many women for financial or visa reasons. You could tell them why you will be Marching on Saturday 27th: for women today and for the next generation, and why you hope your public representatives will March with you and for you.

5. Invite your Doctor to the March for Choice!

Does your GP know that you are pro-choice and that you want a better deal for women’s healthcare in Ireland?

You could talk about Doctors for Choice Ireland, a group of independent medical professionals who campaign for Choice for women in Ireland. You could tell your GP that you are concerned about how the new legislation will work in practice, and that you want them to have all the means medically available to them when supporting you during a pregnancy. You could talk to them about their vital role in your life; seeing you at different stages, not just you perhaps, but your family too; and that it is really important to you that your GP is empowered by the Irish state to put your body first, which can ONLY be achieved by the Repeal of the 8th amendment.

6. Invite your friends and neighbours to the March for Choice!

As we get ‘ready to rumble’ in the streets with our wheelie cases on Saturday, today is the day to ask your friends to join the March. You could talk about the thousands of people who travel for abortion every year in Ireland; and the ongoing hypocrisy that, while they are legally permitted to travel for abortion, they are denied the right to access one here at home. Being prochoice means you know Ireland can do better for its people!

You could talk about the secrecy and stigma that surrounds abortion. Just having the conversation with your friends is a small contribution to fighting against that discrimination; acknowledging that people in Ireland have abortions and that it is their right. Being prochoice means calling for an end to the shame and secrecy about abortion. You could talk about the 8th amendment – for as long as it remains there will be no control for women of their body during pregnancy. The 8th amendment does not represent the real, lived experience of people in Ireland. No one of child-bearing age voted for it.

Being prochoice means marching to #repealthe8th and for free, safe, legal access to abortion here in Ireland. If you have ideas about how to talk about choice or would like to share your experiences of talking about abortion with your family, friends or representatives, please share them with us on Twitter @freesafelegal using #ARCMarch2014 or on Facebook.