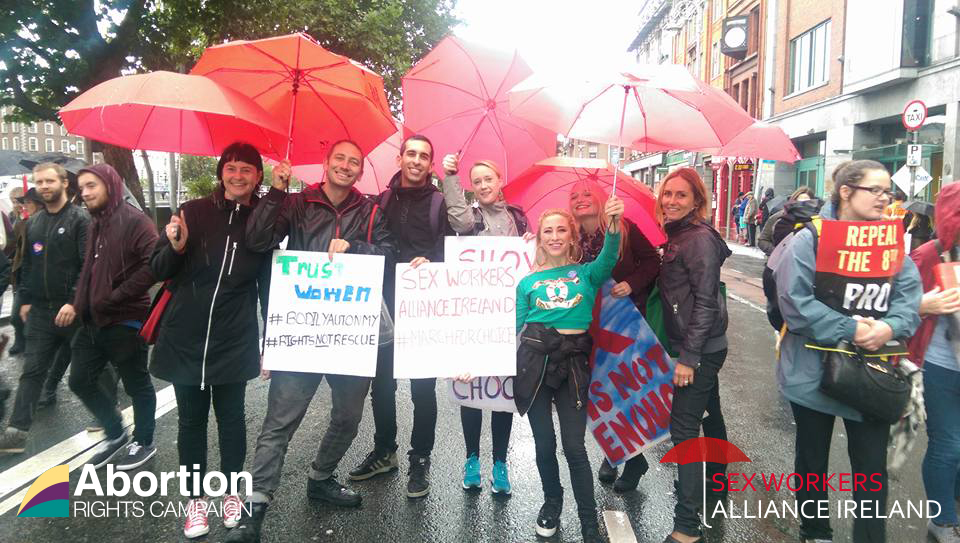 By @CuteCatriona and Grace Wilentz

The Abortion Rights Campaign (ARC) and the Sex Workers’ Alliance Ireland (SWAI) are part of a larger, integrated movement for sexual rights and bodily autonomy. This includes maternity rights, access to contraception, and comprehensive sexuality education and information to name just a few. In a vision for a better world, we are building solidarity across movements and drawing out the synergies, as campaigns such as ours calling for abortion rights and sex workers’ rights do not exist in a vacuum. It is important to show our solidarity, because these campaigns represent different dimensions of a shared struggle to address different manifestations of the same underlying forces of oppression.

At the Abortion Rights Campaign AGM in 2015, our membership took the decision (with one abstention and no objections) to support the aims of the Sex Workers’ Alliance Ireland: to hold the Irish state accountable to its obligations to respect, protect and fulfil the human rights of sex workers. This post outlines some of the reasons underlying this decision.

Since its inception, the Irish State has sought to control women’s bodies and sexuality. Pervasive social stigma and hostility towards women and girls[1] who seek abortions, and stigma and discrimination against sex workers, are both underpinned by the belief that, women in particular, cannot be trusted to make decisions about their own bodies. The state assumes control over decisions relating to women’s bodies and sexuality, emboldened to do so by widespread social complicity in the idea that, if unchecked by the state’s power and control, women’s decision making will automatically be bad, uninformed, irresponsible or malicious. And so, the state directly or indirectly criminalises specific choices women may wish to make about their bodies, health, and sexuality, thereby limiting their options.

The similarities between the struggles for sex workers’ rights and the struggle for abortion rights do not end there. Those who are opposed to sex work and abortion ignore the voices and lived experiences of the majority of those who are directly impacted- women who seek abortions and sex workers themselves. Those who regret their choice to have an abortion or who regret their engagement with sex work are the only voices permitted to enter the debate. These narratives fuel a disturbing narrative: the idea that because some people regret their choices, choice and autonomy should be denied to all women and sex workers. While some people do indeed regret their life choices, others do not, and it is fundamentally patriarchal and contrary to human rights principles to deny people a voice in the decisions that will impact their lives.

The “wrong choices” narratives we hear from anti-choice voices and those who want to abolish sex work rely on the silencing effect of stigma and the incredible ability of policy-makers to reject evidence-based policies if they would benefit people the society deems unworthy or undeserving of human rights and equality.

Criminalisation means sex workers and people who need abortions are made to feel that state institutions do not have their best interest at heart. People who take abortion pills often fear presenting at a hospital if they experience complications. Sex workers may feel unable to go to the police if they are robbed or assaulted at their workplace. Individuals know they may face the humiliation of being chastised for their decision, bribed, or perhaps even arrested.

We cannot talk about the similarities between the struggle for abortion rights and for sex workers’ rights, without mentioning the impact of stigma. Criminalisation nurtures stigma and thereby pushes people into unnecessary, avoidable danger. Stigma feeds a silence, which is starting to lift as we begin to hear the unapologetic voices of sex workers and women and girls who have abortions. Stigma is also diminished when people show their support with “Repeal the 8th” badges and by attending vigils to convey their support for the health, lives, safety and rights of sex workers. Decriminalisation will not entirely lift the stigma associated with sex work or the choice to have an abortion, but it will certainly alleviate some of it. Stigma perpetuates the idea that some people are less deserving of safety and care; this is a fundamental inequality that every society must reject.

[1] Throughout this post, we refer to women and girls seeking access to abortion services. We acknowledge however, that not everyone who may require abortion services identifies as female. In particular, we are referring to trans men and people who identify as non-binary. We use the terms ‘women’ and ‘girls’ but understand that other individuals of all genders and none will benefit from the repeal of the 8th Amendment.