From 10pm this Sunday 20th March 2016, Abortion Rights Campaign will host a Twitter Party to coincide with the Reproductive Freedom Festival streaming LIVE from The TACT Studio in New York City, USA. The festival will host a pre-show on the theme of ‘Ireland’ at 10.30-11pm GMT. The pre-show features two works, one of which has been developed by some of our activist members called ‘The Renunciation’. All are welcome to join us from 10pm as we connect with the festival audience across the Atlantic via @freesafelegal. Hashtags we will use for this event are #Repealthe8th and #ReproRights To view the festival live stream from 10.30pm, simply use any device to go to http://reproductivefreedomfestival.org/watch/ 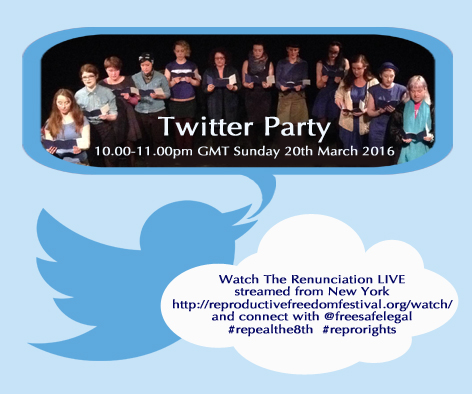 How The Renunciation was created

Some of our activist members who have an interest in the intersection of arts and activism participated in a research and development phase for a long-term project with artist Siobhán Clancy. This phase was funded through The Arts Council Artist in the Community Scheme managed by Create (The National Development Agency for Collaborative Arts) with mentorship by performance artist Áine Phillips. One of the outcomes of that phase has been the formation of ‘home|work’, a feminist art collective which “collectively confronts censorship and self-censorship through art, action, performance, conversation and camaraderie“. (See www.homeworkcollective.tumblr.com)

home|work created The Renunciation as an artwork in the form of a performed reading. It relates experiences of abortion seekers that draw on well-known court cases, anecdotes and personal experiences. According to the creators, it seeks to intervene respectfully in the reflective space offered by the modern day Angelus and to challenge idealised notions of womanhood and mothering that overlook less-than-ideal and unviable circumstances. Other themes that home|work members tackle in their work include historical and contemporary practices of social control over female sexuality in Ireland, gender-based sexual violence and manifestations of censorship and self-censorship in work culture, Irish history and society.

The Renunciation is a participatory artwork that has been performed in art venues as well as public spaces around Ireland by groups and individuals consisting of artists and activists as well as people who would describe themselves as neither. Performance locations have included The Complex, The Project Arts Centre and BusÁras in Dublin. The feminist art collective Speaking of I.M.E.L.D.A. performed The Renunciation in London on St. Brigid’s Day 1st February 2016 as part of a multi-location simultaneous set of performances in Cork, Dublin, Galway, Limerick and Maynooth. It was also performed at the inaugural Inroads Global Members Gathering in Bangkok, Thailand on 9th March 2016.

More about The Reproductive Freedom Festival

The Renunciation by home|work will be accompanied on stage at the ‘Ireland’ pre-show of the Reproductive Freedom Festival by Samantha Lierens’ “Savita“. Both works will be performed by a live NYC-based cast directed by Thais Flaitt Giannocarro.

The pre-show precedes a fantastic programme of readings from original works submitted by writers from all over the USA. The festival is the brainchild of Cindy Cooper and the crew at Words of Choice (www.wordsofchoice.blogspot.com). The festival has recently been awarded a Puffin Foundation Grant. For more information about the full festival programme and the inspiring people behind it, go to: http://reproductivefreedomfestival.org/about-the-festival/ 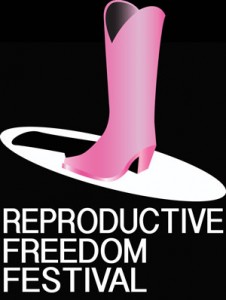