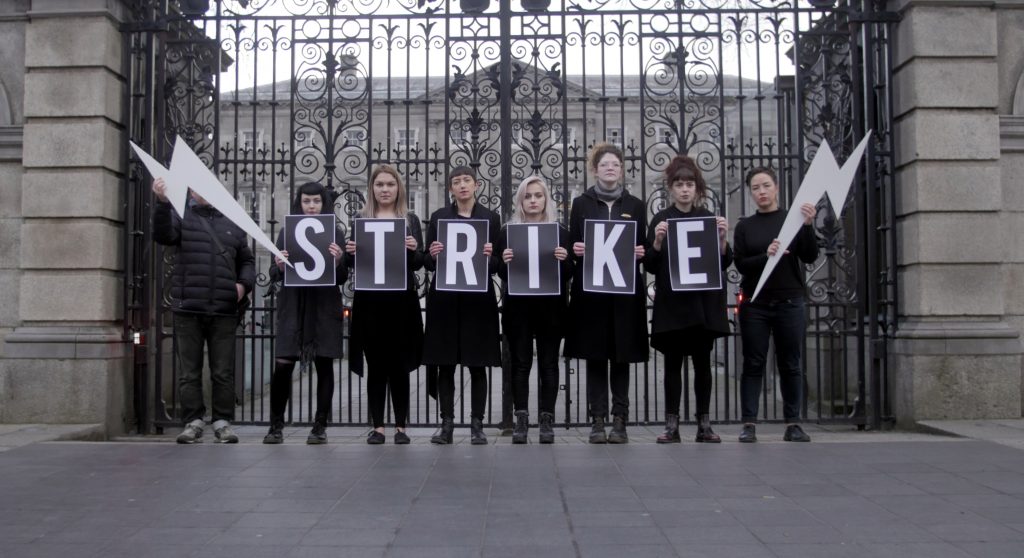 On each of these dates, in each of these countries, thousands of women went on strike to protest inequality in the workplace, the home, and other arenas.

This kind of strike is by no means a novel concept. The withdrawal of domestic or industrial labour, whether directly affecting capital and its power relations, or more symbolic in nature, is something that which has been tried and tested – both powerful and effective.

Perhaps one of the most relevant of such actions was the women’s strike in Poland, or Black Monday (Czarny Poniedziałek), as it was dubbed. On a rainy day in October last year, thousands of brightly coloured umbrellas filled the streets of Poland, from Warsaw to Krakow, Lodz to Gdansk. The approximately 98,000 people who gathered on that day were protesting the proposed implementation of a near-total ban on abortion, after almost 40 years of liberal abortion legislation and access. Three days later, with public pressure building and support for the pro-choice movement growing, the bill was voted down.

Our situation differs to the Polish one in many ways. Though abortion remains highly restricted in Poland with, for example, many doctors refusing to perform abortions on the basis of conscientious objection – the activists who gathered on that day in October in Poland were fighting to cling on to the abortion rights they still held. In Ireland, we are fighting to gain these rights for the first time. That said, in terms of social context, Poland and Ireland are both countries that have been deeply impacted by systems of Catholic hierarchy and stigmatising perspectives on female sexuality. In Ireland, the once unwavering power of the Catholic Church has been waning since the 1960s, now at unprecedentedly low levels. Poland, however, as a post-Communist country, has been described as experiencing an ‘inverted sexual revolution’, in the face of a still-powerful Catholic Church.

Comparisons between the Irish and Polish situation are fascinating. Ultimately, however, they teach us something.  Rights are never just handed out, they must be fought for. And, vitally, people power works.

Inspired and educated by Black Monday, among other actions of women across the globe, Strike4Repeal was launched, calling for a referendum on the Eighth Amendment to the Irish Constitution. The Eighth Amendment, inserted in 1983, equates the life of a pregnant person with the life of a foetus, and limits abortion in Ireland solely to circumstances where there a ‘real and substantial risk’ to the life of the mother exists.  The impact of Ireland’s abortion laws and the Eighth Amendment have been far-reaching. The Eighth Amendment affects maternal and pregnancy rights. It prevents those carrying foetuses with fatal abnormalities from accessing abortions. It has resulted in the deaths of women in Ireland. It forces people who wish to access abortions to travel overseas (if they have the means and ability to) or face a 14 year jail sentence for importing and taking medical abortion pills in Ireland. We have remained patient in the face of this injustice for a long time – our patience is wearing thin.

The only way we can begin to change this situation is by repealing the Eighth Amendment. The Citizens’ Assembly, due to wrap up discussions and report back in early March, is, in our view, merely a delay tactic. Despite the fact that opinion polls indicate that a significant majority of the Irish population are in favour of repealing the Eighth Amendment, current and previous Governments appear unwilling to touch the issue. What are they afraid of? Who is this ‘Middle Ireland’ they speak of? If the figures indicate a willingness to hold a referendum on the issue, why don’t we hold one? It boils down to this: why ask 99 people when you can ask an entire country?

So, on the 8th of March in Ireland, on International Women’s Day, strike. This is not a traditional industrial strike, but there are many ways you can observe and support it. If you can, take the day off work. Forgo domestic chores if possible. Ask local businesses to close their services in support. Or wear black in solidarity, and register support on social media using the hashtag #strike4repeal.

For more information on Strike4Repeal, check out their website, go to their Facebook page or email them at [email protected]