Day 3 of our 8 Censored Books where each day on the run up to our event with US author and journalist Katha Pollitt, Abortion Rights Campaign will be highlighting the 8 books that are censored in Ireland. Every book that is censored in Ireland is due to content about abortion. So check back here for tomorrow’s book and let us know what you think at @freesafelegal and using #RepealThe8th or #8Books8Days hashtags. 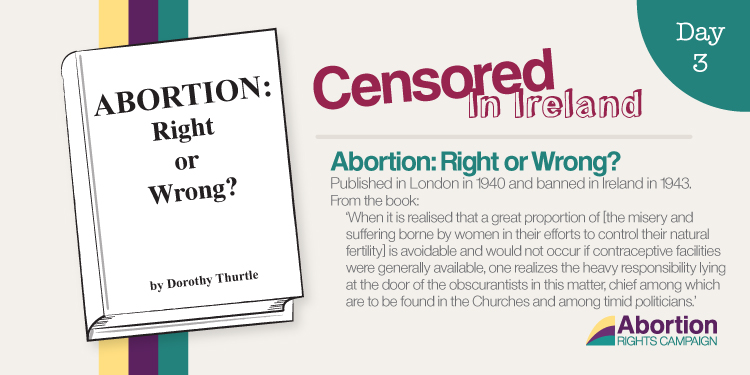 Dorothy ThurtleABORTION: RIGHT OR WRONG?(London: T. Werner Laurie, 1940)One might imagine that the Censorship of Publications Board would have considered the title of this essay a rhetorical question. It’s highly probable that a board having its roots in an entity called the Committee of Enquiry on Evil Literature had unyielding notions of right and wrong.Ms Thurtle shows restrained but powerful eloquence in her condemnation of craven and pietistic elements of political and religious institutions of the day:

Perhaps unsurprisingly, the spirit of empathy and sheer logic regarding matters sexual and family planning in this article had no place in the Ireland of John Charles McQuaid.Two years later the Board would famously ban Kate O’Brien’s The Land of Spices merely for containing a single-sentence allusion to gay love: ‘She saw Etienne and her father, in the embrace of love.’