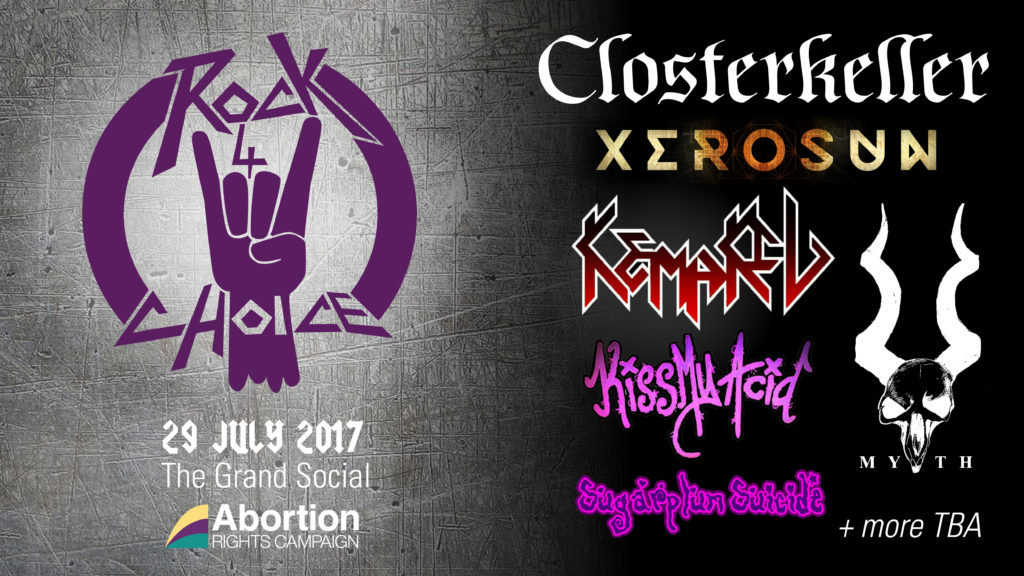 We are launching a brand new music festival in Dublin to stir interest amongst Irish rockers and metalheads. It is taking place on July 29th at The Grand Social.

Rock 4 Choice was originally a series of benefit concerts held over the ten-year period between 1991 to 2001 in the United States, including notable artists such as Joan Jett, Soundgarden and Nirvana. Rock 4 Choice Ireland will continue this fantastic legacy, building  a platform for musicians to voice their support for the Abortion Rights Campaign and literally scream their lungs out to ‘Repeal the 8th!’.

All proceeds from this event will go to ARC, which is entirely run by volunteers.

Festival organiser, Martyna Halas-Yeates, says: “In the 1st edition of R4C, we bring you a lineup consisting of great bands, all featuring female musicians, across various rock and metal subgenres. We wish to reinforce the message that women should be trusted to choose for themselves. Rock and metal are still mostly male-dominated genres, so with this event we hope to prove that girls can rock just as hard! We are delighted to have so many talented bands on board so far; headlining this year is Closterkeller, a cult goth rock band hailing from Warsaw. Performing continuously for nearly 30 years, they were the forerunners of gothic and atmospheric rock in Poland. The band’s charismatic front woman, Anja Orthodox, is well known for her pro-choice views and activism apparent in her lyrics. They are no doubt the perfect band for the bill!”

Tickets will go on sale on June 1st via Eventbrite: https://www.eventbrite.ie/e/rock-4-choice-ireland-tickets-34770287867