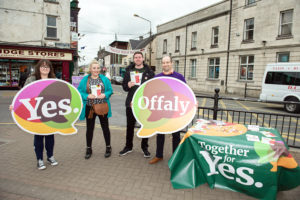 I’m flying to Dublin for the day to join the March for Choice. I don’t have time for a longer visit now, so I’m flying out from London first thing in the morning, back at 8pm that night. I’ll be going the other way, but it’s the journey that thousands of people have had to make to access healthcare. I figure if they have to do that under those awful circumstances, I can do it to lend them support.

The day I left to move to the UK, my sister sent me a message saying “We’ll miss you, but enjoy bodily autonomy!”.

Before I moved away, I had attended the first few Dublin marches. While in London I joined the London-Irish ARC’s efforts and saw it grow from a group of around 30-40 people in Parliament Square to the hundreds that come out now. I marched in the St Patrick’s Day parade, proudly displaying what being Irish means to me – fighting to make Ireland a fairer, kinder, more equal place to live.

Last year’s March for Choice happened while I was home for a visit, the first time I’d been in Ireland on the day for many years. The scale of it, the amount of people and how the movement had grown since the first march filled me with hope and reassurance and was truly inspirational.

The entire campaign and everyone involved inspired me. I watched the passion and commitment of people I know and love and those I had never met. The local groups – especially the wonderful Offaly Together for Yes, my home county – touched me in ways I never expected. As I watched the crowdfunding campaign for posters grow and grow I cried a little bit in the office.

Despite it being one of the times I’ve felt most connected to home, it was hard watching from afar. I could contribute to the crowdfund, could attend the London-Irish ARC events, but I couldn’t share the heavy lifting. And I know it was heavy lifting. I saw the cost in time, in energy, in the emotional labour and the abuse people had to deal with.

I came home for the referendum and nothing will ever match that feeling – the knowledge that it had worked – that this incredibly inspiring group of people had achieved something I thought only ten years ago would be impossible. It was a sign that Ireland is changing. That the referendum won by such a margin actually makes me feel that I could live in Ireland again, that I don’t have to choose between.

I’m travelling to Dublin to lend my voice and my feet to the continued fight. The campaign was fought for free, safe and legal abortion access, and until that is available then it’s not done. I’m also marching for Northern Ireland, and the campaign for abortion access there.

Another big part of my decision to fly back for the day was that I want to be there to thank everyone who made it possible – who gave their time, energy, stories, voices and so much of themselves to this campaign. Your passion and commitment and courage have changed Ireland, and I’m so proud of everything you’ve done.

So in case I don’t see you on the day – you are all superheroes, and you’ve achieved something incredible. Thank you!