Why I’m Marching: The terror of no choice 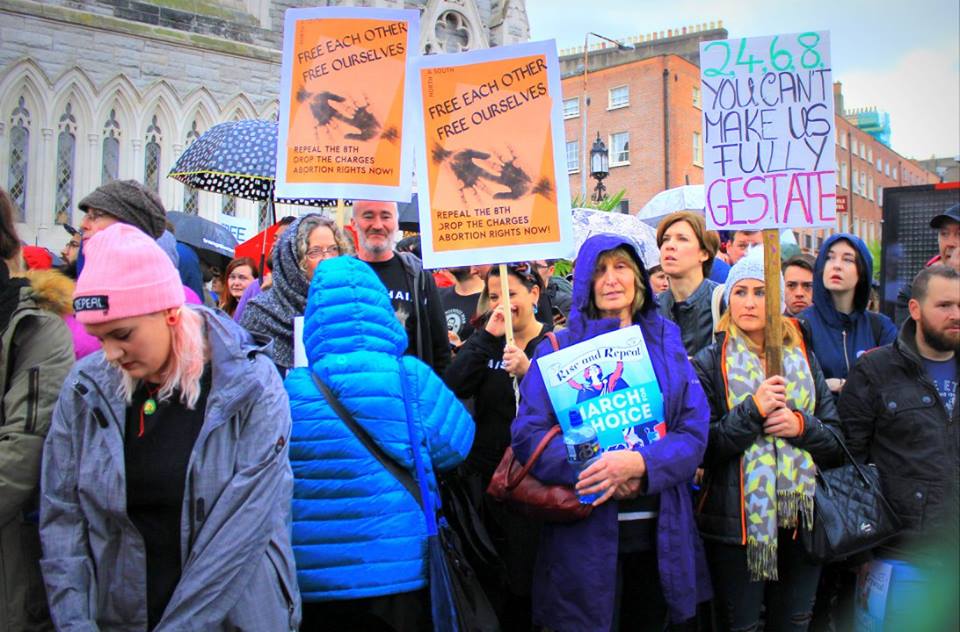 As we do every year, we’ve been asking you to tell us why you are marching in this year’s March for Choice. Thanks to all who have sent us your thoughts. In this post, Karen remembers a pregnancy scare and the overwhelming feeling of terror that having no choice imposes on people who can get pregnant.
If you would like to tell us why you’re marching this year, please email [email protected]

“I still don’t know, 15 years later, what I would have done if the pregnancy test had turned out to be positive. I think about it now and again. I don’t have an answer. I just remember that overwhelming feeling that I really had no choice in the matter at all.”

WHEN I was 23 and working in my first job I woke up one morning to realise my period was late.

Just by a day, but since they had started ten years earlier I had been as regular as clockwork, every 26 days without fail.

I confided in a friend who advised waiting a few days, maybe a week, as periods aren’t set in stone. It will be fine, she comforted, squeezing my hand tightly.

I ran through my options in my head wondering what I’d do if it turned out I was pregnant. I wasn’t in a relationship, I had only been dating the guy casually for a short amount of time, I had a job but it was low paid and I lived in a bedsit that was about the size of an average sized bathroom. I felt entirely unprepared for a baby, I did not want one at that time.

I thought about abortion but as abortion was – and still is – illegal in Ireland I would have to travel to the UK to be able to avail of it. How could I afford that? How would I even know where to go? This was before the explosion of social media, before Facebook and Twitter. It had only been a few years since the ban on UK magazines advertising abortion clinics in their Irish editions had been lifted. Information was out there but it wasn’t readily accessible. I would have had to go alone, find my way around a large city I had never been in and navigate the health system there, with no help. I felt well and truly stuck, with no options. I remember sitting in a cafe in Rathmines crying behind a magazine, trying not to be noticed by the other customers, thinking over and over ‘you’ve no choice, you’ve no choice, you’re just going to have to have a baby, like it or not.’

I spent that week crying, drinking and running to the toilet every half an hour desperately looking for any sign of my period arriving.

After the week had passed and there was still nothing, I called another friend and told her what was happening and she told me to get on a bus and come to her and she’d be with me while I did the pregnancy test.

When I arrived at her house I went straight to the bathroom to get it over with . I remember wee-ing all over my hand and the seat as I was shaking so much doing the test.

I wasn’t pregnant. It was a blip, a glitch in my cycle, sometimes it happens, my doctor told me later.

But other women would have to. On the day I was sobbing with relief in my friend’s bathroom, ten women were sitting in clinic waiting rooms in the UK, waiting to have an abortion, unable to access this healthcare at home.

I still don’t know, 15 years later, what I would have done if the pregnancy test had turned out to be positive. I think about it now and again. I don’t have an answer. I just remember that overwhelming feeling that I really had no choice in the matter at all.

If our laws change and abortion becomes available in Ireland there will still be crisis pregnancies. Women will still hide behind magazines crying their eyes out in anonymous cafes. They will still call their friends looking for help and guidance. They will still lie awake at night thinking and worrying and wondering what they’re going to do. But, crucially, they will have two very clear and legal choices. Some will choose to continue the pregnancy and some will choose to end the pregnancy. Whatever they choose to do, they will be able to do so in their own country, safely and legally. This is the bottom line.

This Saturday, September 30, 2017,  the Abortion Rights Campaign will hold its annual March for Choice in Dublin City Centre calling for a full repeal of the clause in our Constitution that prohibits abortion here (the Eighth Amendment) and for legislation to be passed allowing free, safe and legal abortion access for Irish citizens, in Ireland. They need boots on the ground to really highlight this issue to the general public and to Government. This is why I’m telling my story of why I’m marching and why I’m pro-choice. Please come and join us on Saturday. Please come up for the March. We need you.

NOTE: This week the Irish Government announced that a referendum in relation to repealing the Eighth will be held in the middle of next year. We still don’t know the exact date, the wording of that Referendum or how exactly it will work or what legislation is being proposed but for now it is to be cautiously welcomed. The March for Choice is even more vital now as we work towards the Referendum.

One thought on “Why I’m Marching: The terror of no choice”