Sharing stories: I was fragile teenager being told to keep the pregnancy 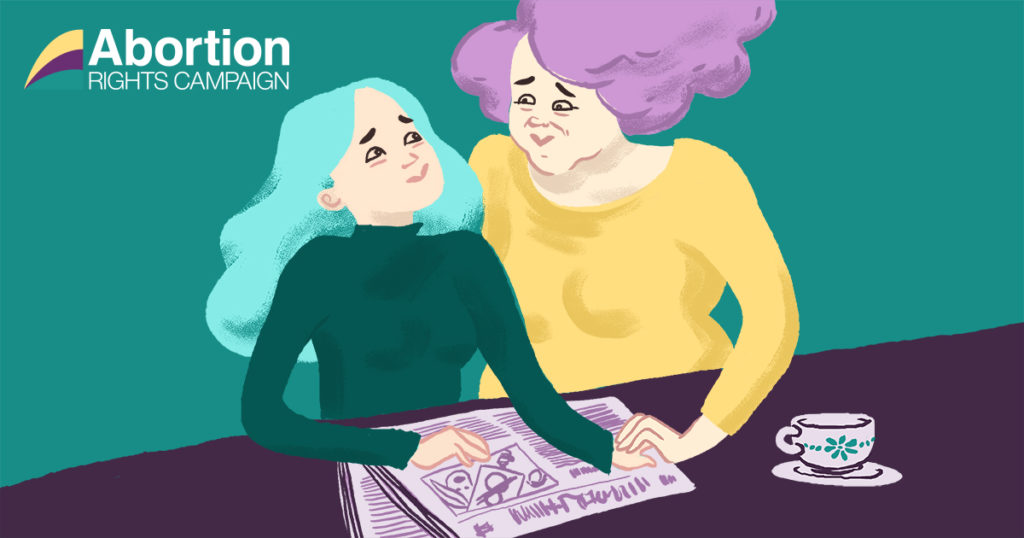 I was eighteen years old when I took my first pregnancy test. I was in a bathroom with a couple of friends, waiting calmly for the result. Despite having the warning signs of morning sickness and a late period, I was sure that it would be negative. There was no way I could have been pregnant as I had gotten the morning after pill.

The test was positive. I took another and, though the result stayed the same, I continued to hold on to any glimmer of hope, insisting that the test may be faulty.

I told a close family friend who brought me to a doctor. The doctor confirmed exactly what I didn’t want to hear: I was pregnant. He asked me what I wanted to do but I didn’t know. I hadn’t thought that it would get that far. I was young and naive and really hoping that I would wake up from the nightmare that was manifesting itself all around me.

When I told my family it broke their hearts. They knew that I didn’t have an easy decision ahead of me. I’ll never forget that day. My mam brought me to a female doctor to get a confirmation pregnancy test. It was positive. I was definitely pregnant and it wasn’t a dream. At this stage I’d had a while to process and, after much thought, I decided that an abortion was the right decision for me. I was eighteen, in college, working a part time retail job and living at home in a box room. I knew I couldn’t be pregnant for nine months and give the baby up for adoption and I knew I wasn’t ready to become a mother at 18 years of age.

I told the doctor that I believed an abortion was the right choice for me. She looked at me with disgust on her face and bluntly stated that abortion was illegal in Ireland. She told me that I should have the baby. Her words shook me up. I was so confused. I was fragile teenager being told to keep the pregnancy by a medical professional to whom I had expressed my choice. I was aware slighlty that her hands were tied as to what information she could give me. I was also aware that she was a medical professional and her personal opnion should not have come into the conversation that day. I left that GP and never returned to her nor did my family.

Thankfully, I had support from other adults in my life and didn’t listen. I followed through with the abortion. I went to Manchester at ten weeks pregnant, not knowing much about abortion because no information was provided for me before I left. I had asked for information from different clinics, none could provide any. I had tonnes of information about adoption and support networks if I was to carry on with the pregnancy, however those were not my choices. On my flight that morning there were four other Irish women of all different ages who continued their journey onto the same clinic as myself. I felt frustrated and angry that our country was pushing us away during our time of need but I also found comfort knowing I wasn’t the only Irish woman sitting quietly in the waiting room.

I had a surgical abortion and I was awake but under sedation. I couldn’t have the general anesthetic as I had to fly back to Ireland that evening for work the next day. I remember it well. I sat recovering in the recliner chair afterwards, trying not to think while other women were sobbing beside me. I blocked out every emotion that I was experiencing and carried on with my day as if nothing had happened.

The Marie Stopes after care guide recommends waiting to fly after an abortion. What other options did I have, other than spending more money on accommodation and missing a day of work? How would I explain that to my boss? I sat around later that day in a café, waiting for my evening flight and pretending I wasn’t suffering from severe cramps and bleeding, trying my best to be normal. When I arrived home that night a sense of relief, which I wasn’t expecting, washed over me. I had been told that this was wrong. I expected to feel no relief, just remorse.

About two weeks after my abortion, I went to the Reproductive Choices clinic on Berkeley Street to get an after care check up. As I was leaving, there were ”pro-life” or anti-choicers as I like to call them outside the clinic. They shouted demeaning words at me and waved their usual graphic posters as I walked out. The experience shook me and I cried walking down the street. Though I have repressed this memory as much as I can, to this day I still get upset when I think about the teenage me being persecuted by grown adults on the side of the road, people who didn’t know anything about me or my situation. After that incident I managed to pull myself together. I wiped away my tears and met up with my mam. When she asked how it went, I said ”grand” and that was the end of that. I still cry when I think about that expierence and I hope if any one thinks to go ahead and do that again they should think twice about what physological damage that could have on a young girl.

Until recently, my mam and I have never revisited the topic. I knew she cared. She would ask me how my counselling sessions went and deep down I knew that this was her way of asking how I was coping with the abortion. She just didn’t know how to approach the subject. I didn’t know how to approach it either. We had grown up generations apart yet both in an Ireland where silence on abortion is the norm.

Due to the effects that the Repeal the Eighth movement has had on the national conversation around abortion, I finally felt able to discuss the topic with my mam at the age of twenty three, five years after I made my choice. I felt that a space had been created for us to discuss abortion from a distance. I asked my Mam if she had she been keeping up with the movement and told her about a story I had read which really comforted me because it was similar to mine. I told her I was thinking about writing my own story. She asked me if I felt that I made the right decision. I explained that it was the best decision I had ever made. With tears in her eyes, she told me how happy she was to hear those words. If it wasn’t such a taboo topic we may have had this conversation many years ago.

I was one of the lucky ones. I had a supportive family and friends I could talk to. I had money to travel and I had the means to attend regular counselling after the abortion. I can’t imagine what my life would have become if I wasn’t in that situation.

I have thought about writing this piece for a long time. I think that it’s important to keep the conversation going because the more people that come forward with their experiences, the more power we have to shake the stigma of abortion. Every day, twelve women travel out of Ireland to get an abortion. Twelve devastated women, afraid and often alone, leave our country every day to obtain the freedom to make a choice about their own bodies. This happens and it will continue to happen. We need safe, affordable and legal access to abortion in Ireland; for my generation, for the generations that will follow and for the generations that have been fighting for years. Until this happens we, as women, will never feel equal or safe in our own country.

One thought on “Sharing stories: I was fragile teenager being told to keep the pregnancy”