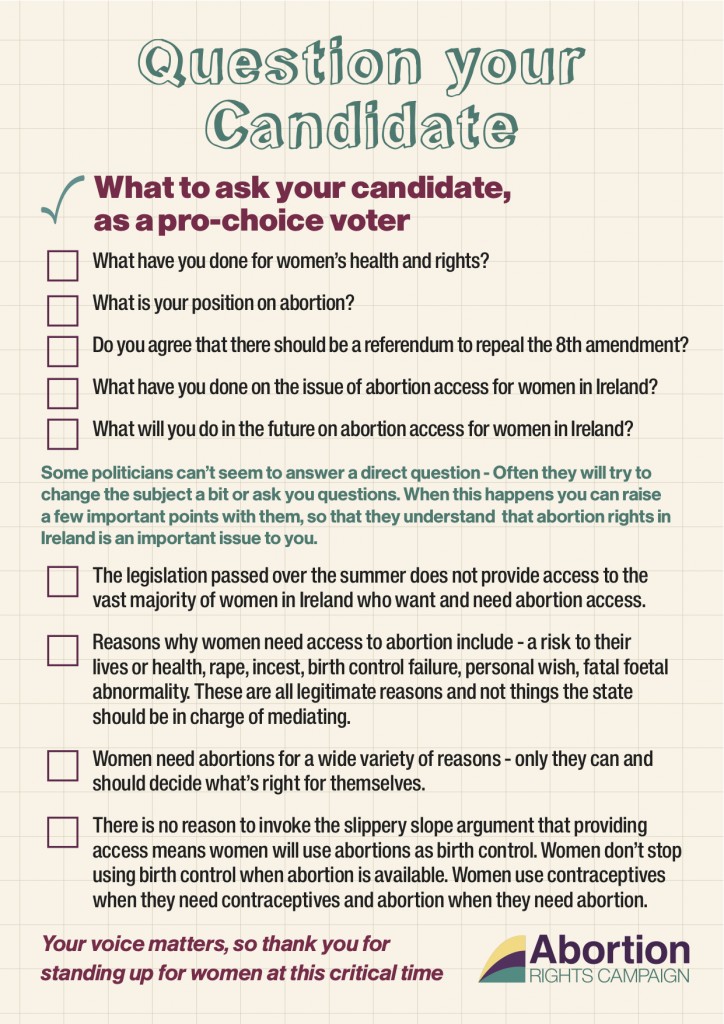 On May 23rd, many of you will cast your vote and decide which candidates will represent us on the local councils and in the European Parliament.

Some of our election candidates are part of political movements currently waging attacks on health and rights in Ireland and Europe by preventing us from accessing free, safe and legal abortion on request (or by attempting to roll back on legislation in countries which currently provides for abortion.)

Often, it’s not immediately obvious where a candidate stands on the position of women’s health and rights, including access to abortion. But our potential elected representatives must be accountable for their views on this issue.

We are asking people to question their candidates in the local and European elections. They need to know that dangerous anti-choice views do not represent what the majority of the public think. We need to show them that abortion access is an issue we care about. They need to know that we will not give political support to a person who is not willing to demonstrate their commitment to working to repeal the Eighth Amendment to the Irish Constitution so that full reproductive health services, including abortion, can be made available in line with best medical practice.

These are some questions you can ask when a candidate or a member of their team knocks on your door and asks for your vote.

Some politicians cannot answer a direct question – Often they will ask you questions or change the subject a bit. When this happens you can also raise a few important points with them, so that they understand the reality and that abortion rights in Ireland is an important issue to you.

We’ve created a handy little checklist you can print out and have next to your door for those coming calling! Your voice matters, so thank you for standing up for women at this critical time.

PDF Version of the Question Your Candidate Checklist!