No Smoke Without Fire

Whether you live in a country campaigning for abortion rights, or in one trying to maintain them – the struggle against stigma and censorship continues.

Artists and abortion rights activists – Emma Campbell and Siobhan Clancy were invited to Stockholm this week, to exhibit their work at Abortrattsfestival (Abortion Rights Festival) an exhibition and screening event hosted by the Swedish Association for Sexuality Education, the RFSU.  In January 2015, Sweden will have had 40 years of access to abortion and Abortrattsfestival celebrates this anniversary. Their 40 years of access is an obvious contrast with our own situation, earlier this year in Dublin the Women to Blame exhibition documented the 40 year struggle for access to contraception and abortion in Ireland.

The artists, together with another Northern Irish artist Jamie Harper Mason worked to produce ‘Pack up your Troubles’ an exhibition which presented multi-media and live work commenting on the situation in Ireland where access to abortion is severely restricted and criminalised. The work also explored commonalities and difference in gender politics between Sweden and the island of Ireland. Before abortion was legalised in 1975 in Sweden, women procured illegal abortions or travelled to access abortion legally in the way that women in Ireland north and south, do today. Abortrattsfestival brought many people together to discuss and celebrate choice. 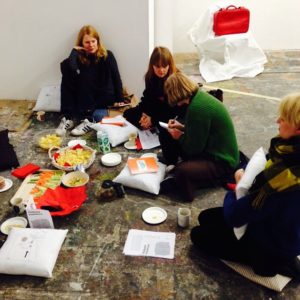 Discussing the differences and similarities

Along with RFSU staff and abortion rights activists, the Swedish Ministers for Equality and Public Health spoke at the event. Hans Linde a member of the left party tweeted a picture of the ‘Case Studies’ prints (made by ARC supporters after the March for Choice) with the message: ‘The best thing from this week: celebrating with @RFSU that women have had control over their bodies for 40 years!’ Attending the launch event also was Dr. Marc Bydgeman who is credited with the invention of the medical abortion. 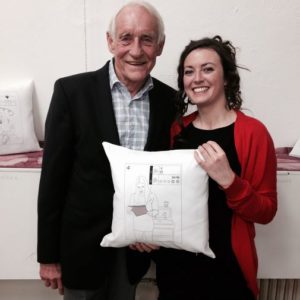 “Vessel” the documentary featuring Dr. Rebecca Gomperts of Women on Web was screened on the final day of Abortrattsfestival and a conversation about the situation in Ireland north and south was scheduled to follow.The room was full of people when three masked men pushed open the front door and shouted ‘out with you f*cking wh*res’ as they threw a smoke bomb into the art gallery. 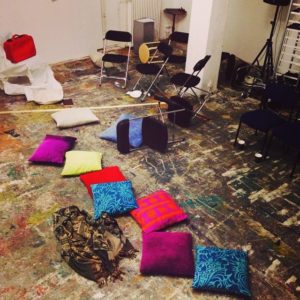 The abandoned chairs after the attack

Both Artists spoke of their fear, shock and anger. Clancy described the initial panic as she ran with everyone, not knowing if the device was an explosive or if it was tear gas. ‘A child who had been playing in the doorway was enveloped in the smoke and her mother ran to rescue her. It was a distressing disruption for everyone but thankfully there were no injuries’. The emergency services quickly arrived on the scene and the gallery was evacuated. As the attendees gathered outside, they felt anger towards those responsible for the cowardly, malicious action. That anger was echoed by neighbours, by people passing on the street and by those sending messages of solidarity to those on the ground. It later emerged* that the disruption was orchestrated by fascist elements who posted about it on an online forum and were congratulated by supporters. Campbell said that ‘the audience members were peacefully watching powerful films about the international struggle for access to abortion rights. Rights enjoyed and celebrated in Sweden for the last 40 years. This unwarranted and aggressive attack reminds us of our shared struggle and highlights that even long-established rights are under constant attack from those who wish to keep women and their bodies subordinate.’

The action has been described as ‘politically motivated’ and there is a general crisis in politics in Sweden right now. The day before the festival launched, the newly-elected (self-described feminist) government called for another election in Spring 2015. It is an attempt to oust a party renowned for its discriminatory policies called the Sweden Democrats who blocked the latest national budget for being too progressive. On their way home, the artists discovered that an in-flight magazine containing an insightful and timely article called ‘The Rise of the Far Right in Scandinavia” by Pers Svensson was pulled from all SAS planes on the complaint of a Norwegian far right party.  Drawing a parallel between these two events, Clancy says “The incidents illustrate an alarming increase in the censorship in Europe of social commentators and cultural producers like journalists, artists and film-makers.” 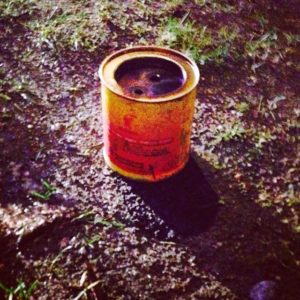 Clancy added, ‘The RFSU Abortion Rights Festival was a dialogue; a gathering of individuals who support a woman’s freedom to do with her body as she chooses. That people resorted to violence to shut that dialogue down illustrates just how threatening it is to those who want to control women’s lives, health and fertility for their own purposes. The idea that women should decide if, when and in what circumstances we get pregnant, give birth and raise children is too radical an idea for some.  So much so, that they resorted to violence. Unfortunately, this action is not unlike the violence committed by groups in Ireland like Youth Defence and Precious Life’.

In the past, members of Youth Defence have used intimidation to reinforce stigmatisation of abortion and those who would speak out. They have also resorted to violence to exert their ‘pro-life’ efforts including the use of pick axe handles and snooker cues and doing damage to property – such as the time a brick was thrown through the car window of Hot Press Editor Niall Stokes. In Belfast, the Marie Stopes Clinic relies on volunteer escorts to accompany clients past protestors. Recently, high profile ‘pro-life’ campaigner Bernie Smyth was charged with harassment and narrowly avoided imprisonment after her case demonstrated what Judge Chris Holmes described as harassment of a “a vicious and malicious fashion.”

Through online and printed propaganda members of these groups persist in their attempts to shut down discussion on abortion rights, reinforce abortion stigma and distort the facts of abortion access through biased publicity campaigns. Supporters of these groups continue on a daily basis to harass staff and abortion seekers at family planning clinics. Earlier this week, the DPP stated that they will not prosecute several crisis pregnancy counselling services for alleged breaches in the law arising from an undercover investigation by women posing as clients. ‘This is about control of women’ said Campbell ‘it’s about state violence against women and the disregard of our equal place as humans. There is no real freedom for the people of Ireland or Northern Ireland without reproductive emancipation.

Clancy and Campbell remain undeterred by the attack. It’s taken a long time to start the conversation about reproductive justice and abortion in Ireland, dismantling the stigma that surrounds it isn’t easy, but it is happening. The reproductive rights movement won’t be hindered by threats or intimidation. If anything, this incident demonstrates that solidarity across society in the struggle for bodily autonomy and reproductive choice is now more urgent than ever.

Emma Campbell is a member of Alliance for Choice Belfast – to find out more visit their site or facebook page, Siobhan Clancy is a member of the Abortion Rights Campaign.