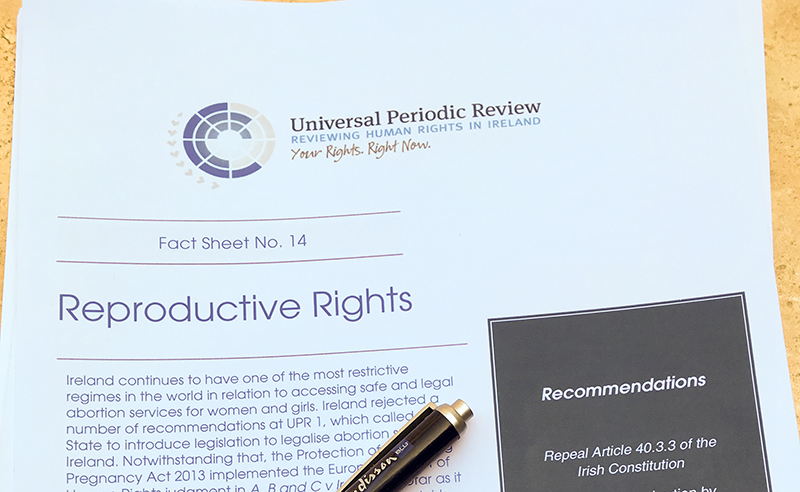 Yesterday (Wednesday, May 11th), Ireland defended its human rights record during a public hearing before the Human Rights Council as part of its second Universal Periodic Review (UPR). The UPR is a unique process involving a review of the human rights records of all UN member states. It is the first human rights mechanism to address all countries and all states.

Speaking before the hearing, ARC spokesperson Michali Hyams said, “At the international level, UN body after UN body has slammed Ireland’s restrictive abortion laws for being incompatible with human rights standards and norms. Today’s hearing in Geneva was no exception. We knew from the advance questions put forward by Sweden, Germany, the Czech Republic and other states that these unjust laws would not escape scrutiny. However, the overwhelming number of UN member states that joined in to call for Ireland to bring its abortion laws in line with international human rights standards showed the clear global consensus on this issue, and that all eyes are on Ireland.”

She added, “Since Ireland’s last Universal Periodic Review, where six states called for Ireland to revise its restrictive abortion laws, little progress has been made. Despite the introduction of the Protection of Life During Pregnancy Act in 2013, change has been insignificant, and 12 women a day continue to travel to other countries to access abortion services that could be made available at home.”

20 countries held Ireland to account for its failure to take meaningful steps to bring its abortion laws in line with international human rights standards and norms.

Denmark expressed concern at the false distinction the Protection of Life During pregnancy Act 2013 makes between health and life. Denmark called for Ireland “To Repeal Article 40.3.3 of the constitution and decriminalise abortion” by allowing the democratic process to unfold. India recommended that Ireland “bring abortion legislation in line with international Human Rights Standards”. This call was echoed by a host of other states including the Netherlands, Uruguay and Iceland.

The United States expressed its concern at “negative developments in women’s reproductive health, including the imposition of criminal penalties on women who procure an abortion and those who assist them in procuring an abortion.” Cuba echoed this statement by expressing its own concern at the Protection of Life During Pregnancy Act, in particular, its restrictive implementation.

Arc spokesperson Janet O’Sullivan said, “Through this UN process, a clear message has been sent to the new Government that the international community is watching, and that it will continue to hold Ireland accountable for bringing its abortion laws into line with international human rights law. The Government cannot continue to employ delay tactic after delay tactic. It must support the democratic process to unfold by allowing the voting public to repeal the 8th. A transparent process that engages meaningfully with rights holders, must be established as an urgent priority of this new government.”

In its submission to the UPR process, the Abortion Rights Campaign drew attention to the shortcomings of Irish abortion law, arguing that the Protection of Life During Pregnancy Act 2013 does not fulfil Ireland’s obligations under the European Convention on Human Rights, nor does it legislate for the constitutional right to abortion established in the X Case. The submission also criticised the State’s decision to re-criminalise abortion under the Act, highlighting that this was a dangerous and unnecessary step, which contravenes human rights standards.