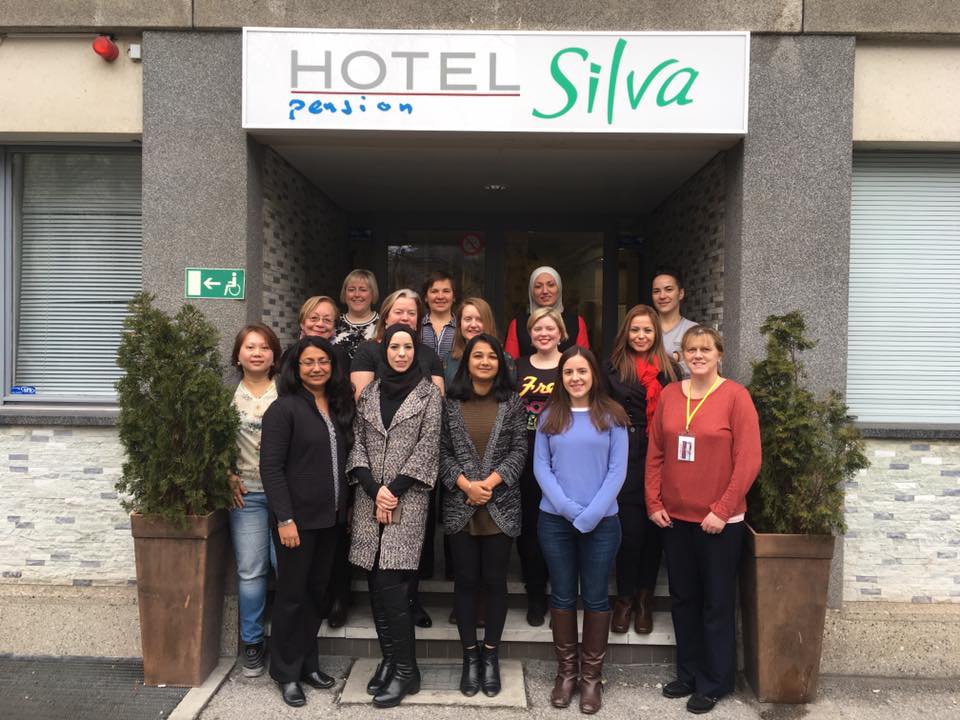 Last year, ARC got an amazing opportunity to participate in International Women’s Rights Action Watch (IWRAR) Asia Pacific from Global to Local training. This training is specially designed to equip women activists (that’s us!) with the skills to successfully engage with the UN Committee on the Elimination of Discrimination against Women (CEDAW). After months of prep work, reading up of Ireland’s previous interactions with CEDAW, participating in the government’s civil society meetings for their State Report, responding to the CEDAW Comittee’s  List of Issues prior to reporting, feeding into a national civil society shadow report, writing our own supplementary report, fundraising and SO MUCH PLANNING, we have FINALLY arrived in Geneva where it is all about to happen, and let me tell you, this is intense.

Our training started 9am Friday morning. We were joined by three other Irish organisations: National Women’s Council, Pavee Point and the Rape Crisis Network. We were also excited to be joined women representing El Salvador, Jordan, and the Ukraine.

Helpfully, the training opened with an explanation of what CEDAW is and how we, as civil society organisations, can use it to hold our governments to account. The Irish State has signed up to many different international Treaties and Conventions. The State is reviewed periodically by the Treaty Body to make sure that it is living up to the obligations under the Treaty, as we saw during the Convention on the Rights of the Child (CRC) and The International Covenant on Economic, Social and Cultural Rights (ICESCR). CEDAW is the treaty that deals with how the human rights of women and girls are breached because of their gender. As with all treaties, the recommendations are binding on the State. In Ireland, we know that the reproductive rights of women and girls are routinely breached because of their ability to get pregnant, so this treaty is of particular interest to us at the Abortion Rights Campaign. The application of CEDAW is monitored by a 23 member committee. The State is expected to report to the committee regularly to show how it is ratifying the convention. Civil society organisations such as ARC then submit shadow reports on the issues they feel are not being implemented and how those issues can be improved. Once every five years, the committee examines each country signed up is examined in the UN. Unfortunately, due to a  backlog, Ireland has not reported in 10 years.

The purpose of the training session is to highlight the roles of the NGOs during and after the CEDAW session. As time is so limited and so many organisations want to speak about issues, it’s important to maximise our presence. The focus of this mentoring programme is how and when to lobby the committee in the few days we have access to them.

We opened by introducing ourselves and naming a feminist hero of ours to put on the ‘Shero Wall’. One of the women from El Salvador had lost her daughter and her sister, she spoke no English and was attending her second CEDAW review of El Salvador. It shows the power of these treaties and the dedication of feminist activists. We felt incredibly humbled hearing her story. Sharing space in a learning environment with women from around the globe who work towards ending discrimination was a powerful and inspiring experience.

We discussed different kinds of systematic inequality and the types of remedies that can exist. We learned some of the focuses of the groups from El Salvador, Jordan and the Ukraine, and what issues they would like the committee to raise for their countries. Much like Ireland, El Salvador is fighting to change its incredibly restrictive laws. Other issues that have come up are rights for ethnic minorities, LBTQI rights, Violence Against Women and  sex-based discrimination against Jordanian women married to foreigners who are not able to pass on their nationality to their children.

We learned how to use the CEDAW frameworks to work towards the reduction of gender discrimination in our countries and to shape policies so that formal discriminations can be reduced and that the implementation happens in a real and substantive way. The approaches to minimise and eliminate inequality must not in themselves cause or reproduce harmful stereotypes about women. 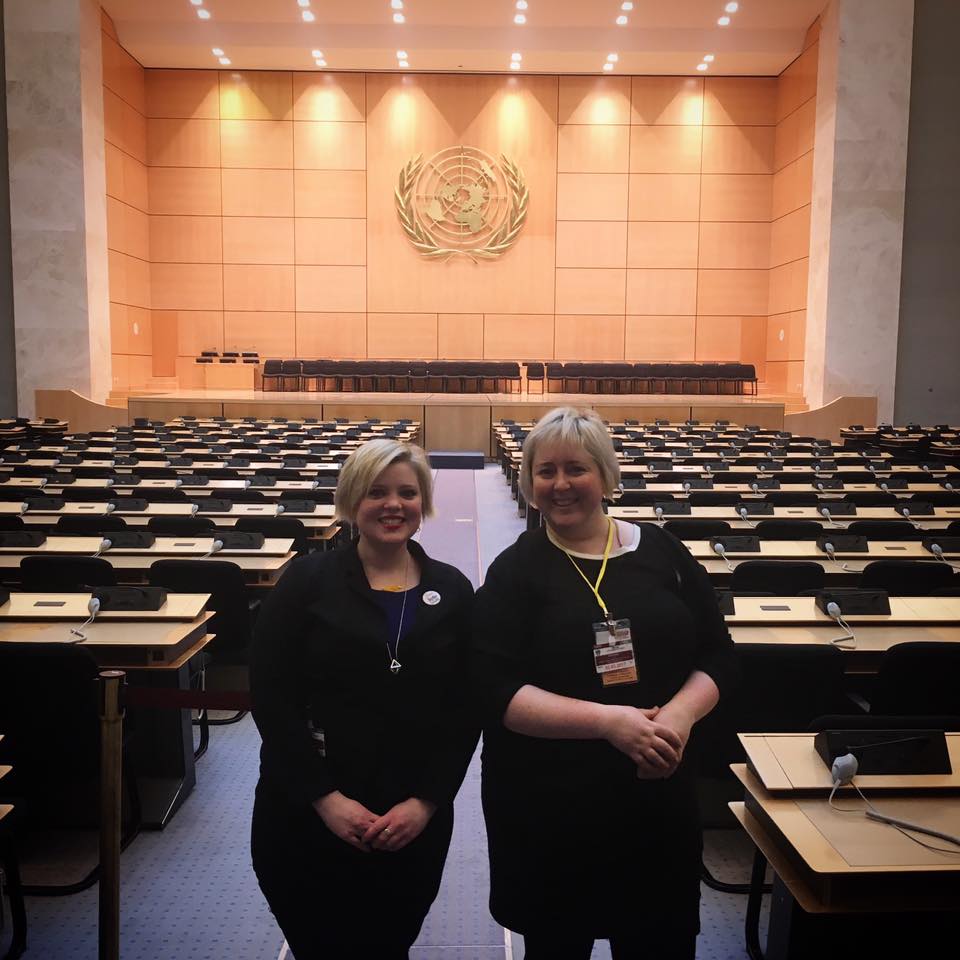 We also learned very practical things such as what to expect in the room in the UN during the oral statement, how to address the members of the committee, the format of the lunch briefing and how to emphasis the points we want to get across. Hopefully this will help reduce our nervousness while performing high level advocacy.

So why are we here? Well, as part of this official process, civil society bodies and NGOs are given 10 minutes for an oral statement delivered in the UN chambers before the committee members. The oral statement is used to highlight urgent and priority issues that we feel the government must address. Due to some incredible negotiations, Ireland has managed to extend our speaking time to 15 mins; ARC have secured 2 minutes of this to address the committee on the urgent need for repeal. We will also have the opportunity to answer the committee’s questions and clarify any of the unusual particulars of the Irish system and meet with the country rapporteur to make sure the committee knows just how urgent our issue is for women, girls and any other pregnant person in Ireland.

In the past, CEDAW committees have queried Ireland’s extremely restrictive abortion laws, so we have the potential to make a big impact and encourage the committee to push Ireland even further during this review. Here are a few excerpts from Ireland’s previous reviews:

IRELAND (1999): “The Committee is concerned that, with very limited exceptions, abortion remains illegal in Ireland” (par. 185).

IRELAND (2005): “Extensive national dialogue had occurred on the issue of abortion, with five separate referendums held on three separate occasions (7). …

“(T)he Committee reiterates its concern about the consequences of the very restrictive abortion laws under which abortion is prohibited except where it is established as a matter of probability that there is a real and substantial risk to the  life of the mother that can be averted only by the termination of her pregnancy.The Committee urges the State party to continue to facilitate a national dialogue on women’s right to reproductive health, including on the very restrictive abortion laws”.

Michali Hyams, one of the ARC Policy and Advocacy Reps will have the great honour of delivering a two minute statement on behalf of ARC, Amnesty International, Center for Reproductive Rights, Irish Family Planning Association, Irish Council for Civil Liberties, Midwives for Choice, NWCI, and The Coalition to Repeal the 8th. This statement has been carefully crafted through months of work and cooperation between organisations to have the greatest impact in front of the Committee. You can watch Michi deliver the statement just after 2pm (Irish time) here. We are hopeful that the CEDAW Committee will follow other UN bodies and deliver the strongest criticism of Ireland abortion laws yet. We came here to fight for Free, Safe, Legal access to abortion for all pregnant people in Ireland. Wish us luck!