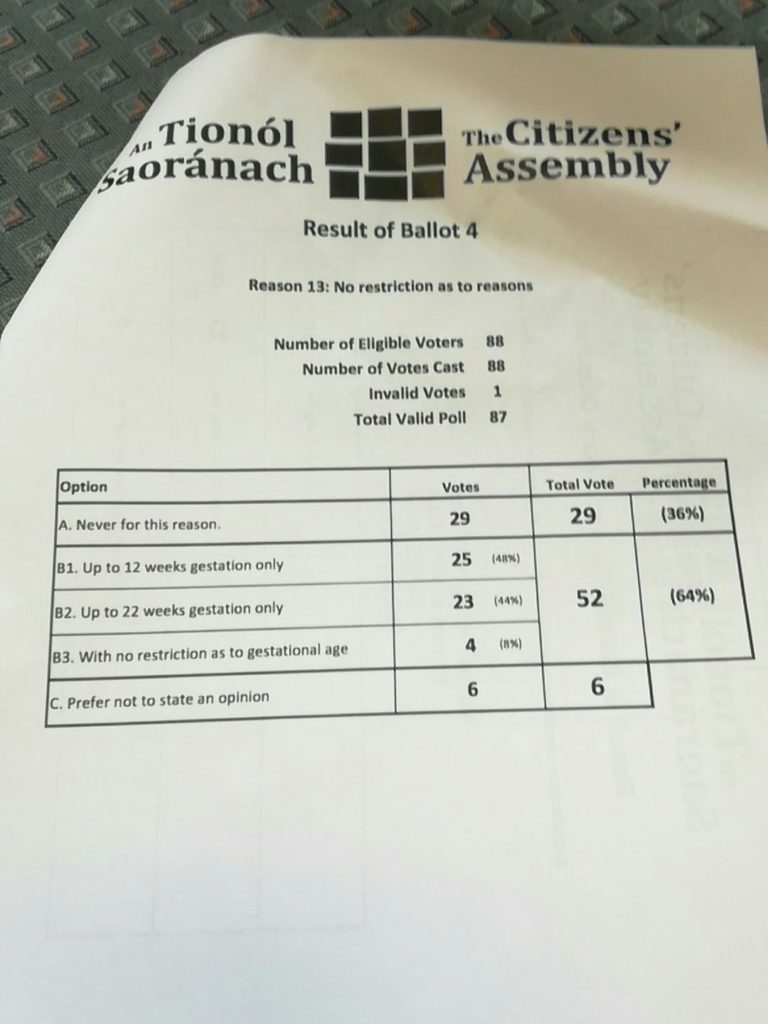 The Oireachtas must now respect the will of the Citizens’ Assembly members and call a referendum without delay.

The Eighth Amendment affects all aspects of obstetric care in this country, it is a constant barrier to women’s equal rights, and its removal will be a huge step forward for the rights of women, girls, and pregnant people in Ireland.

Speaking today at Grand Hotel in Malahide, Linda Kavanagh of ARC said: “This has been a challenging process and difficult to watch for many affected by our laws. However, no-one can deny, looking back at proceedings over the last 2 days, that the members of the Citizens’ Assembly have voted overwhelmingly for choice and change. The members have voted not to put grounds for abortion access in the constitution, and have made very strong recommendations as to the type of access they expect to see introduced.”

Ms Kavanagh continued: “It is vital now that the yet-to-be-established Oireachtas committee recognises the will of the assembly members. They do not want to see the introduction of limitations on abortion in our constitution, abortion is a healthcare issue, and not a constitutional one.”

“Today the Citizens Assembly voted in favour of abortion access with no restrictions within the first 22 weeks of pregnancy. The Abortion Rights Campaign does not advocate for gestational limits, as we know they become a barrier to the most vulnerable access services. However this looks to be a huge step forward for abortion access in Ireland and we welcome that today the Citizens’ Assembly has chosen choice.”

“The best way to meet the needs of abortion seekers in Ireland, and to ensure access to those who need it, is to decriminalise abortion and to introduce of free, safe, and legal access. Currently, the Protection of Life during Pregnancy Act (PLDPA) only allows abortion in extremely restrictive circumstances – it is not fit for purpose, and a new legislative model that follows the same pattern will not be good enough.”

“Thousands of people have marched on the streets over the past months and years to call for a referendum to repeal the 8th Amendment. 87% of the Citizen’s Assembly participants believe that the 8th Amendment cannot remain in its current form. The Government now has a clear mandate to call a referendum, and introduce broad legislation on this issue. It must do so if it is to respect the process which it insisted on introducing. Any delay in this regard must be considered as an attempt to undermine the work of the Assembly and the rights of women, girls, and pregnant people in Ireland.”