Call to Action: Contact Your TD About the Citizens’ Assembly 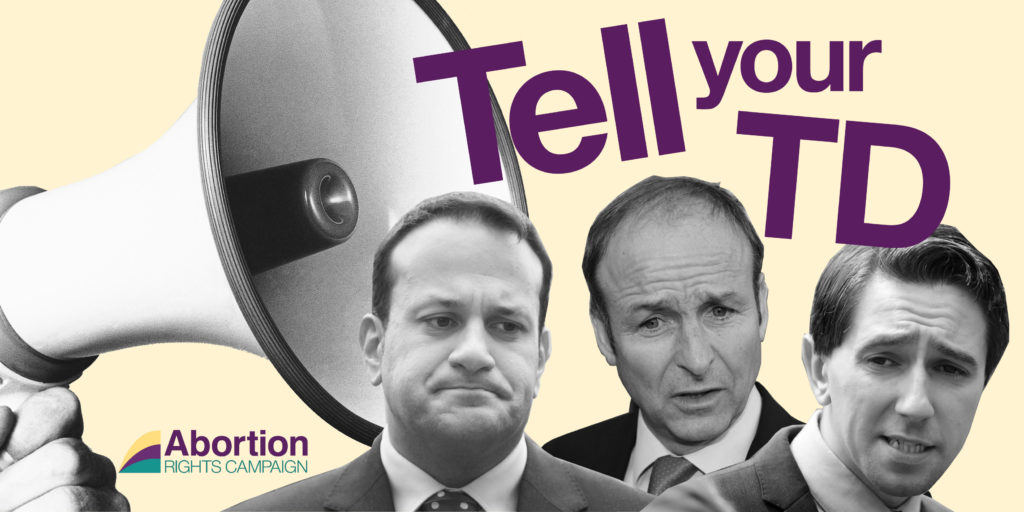 If your TD is pro-choice, tell them they have your support. If they’re not, explain to them that abortion access is important to you as their constituent.

We have put together some sample text for you to use. Feel free to use it while you email, write, or call your TDs. TDs are much more likely to be contacted by the anti-choice side, which skews their perception of public opinion. Make sure your pro-choice voice is heard!

Don’t know who your TD is? Find out here

I am contacting you to register my support for the recommendations on abortion legislation made by the Citizens’ Assembly at the weekend and to ask you to make sure these recommendations, at the very minimum, are enacted as soon as possible.

The Eighth Amendment affects all aspects of obstetric care in this country. Since it is a constant barrier to women’s equal rights, its removal will be a huge step forward for the rights of women, girls, and pregnant people in Ireland.

Last weekend, the members of the Citizens’ Assembly voted overwhelmingly for choice and change. The members have voted not to put grounds for abortion access in the constitution, and have made very clear recommendations as to the type of access they expect to see introduced.

As your constituent, I’m asking you to make sure the new Oireachtas committee recognises the will of the assembly members. The Citizens’ Assembly voted in favour of abortion access with no restrictions as to reasons (with the vote split between up to 12 weeks and up to 22 weeks of pregnancy). Additionally, they voted for abortion access if the health of a pregnant person (both physical and mental) is at risk, if they have received a diagnosis of foetal impairment, and on socio-economic grounds.

Our current law, the Protection of Life during Pregnancy Act (PLDPA) only allows abortion in extremely restrictive circumstances – it is not fit for purpose – and a new legislative model that follows the same pattern will not be good enough. The best way to meet the needs of abortion seekers in Ireland and to ensure access to those who need it is to decriminalise abortion and to introduce free, safe, and legal access.

Thousands of people have marched on the streets over the past months and years to call for a referendum to repeal the 8th Amendment. 87% of the Citizen’s Assembly participants believe that the 8th Amendment cannot remain in its current form. I believe this represents the feelings of Irish society.

The Government now has a clear mandate to call a referendum and introduce broad legislation on this issue. As your constituent, I hold you accountable for removing the barriers to a referendum. The government must respect the process which it insisted on introducing. Any delay is an attempt to undermine the work of the Assembly and the rights of women, girls, and pregnant people in Ireland.

I look forward to your reply assuring me you will take action on this issue.

4 thoughts on “Call to Action: Contact Your TD About the Citizens’ Assembly”