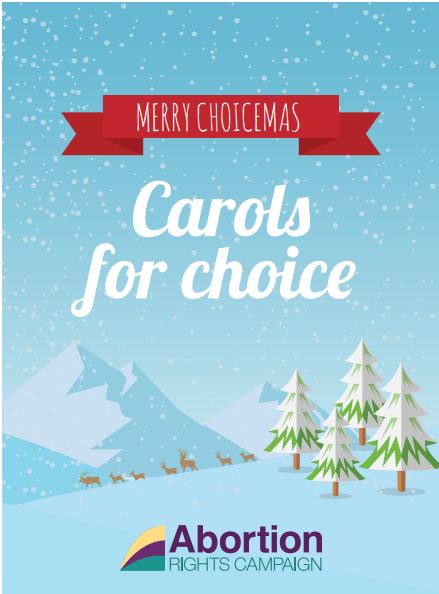 On Thursday December 8th at 7pm, the Abortion Rights Campaign (ARC) is hosting our annual ‘Carols for Choice’ event at the GPO, O’Connell Street, Dublin. The ‘Choicemas’ Carols are fast becoming an institution, with singers from many different groups, well-wishers, and passers-by joining in the fun and serenading city centre shoppers with clever pro-choice versions of some of your favourite holiday songs. This year, we will be joined by members of the Artists’ Coalition to Repeal the Eighth Amendment and the Resistance Choir, among others, to sing old favourites and new versions for 2016.

The Carols for Choice Team were serenading the people of Kerry last weekend at the Other Voices festival. Members of the “Voices for Choice” troupe spent Saturday night busking Choicemas Carols as part of the Music Trail on the streets of Dingle, as music-lovers descended on the village for the prestigious festival.

“The Carols for Choice is one of the most fun events in ARC’s year’ said Janet Ní Shuilleabháin, spokesperson for the Abortion Rights Campaign. “We really enjoy coming up with the funny pro-choice lyrics and singing our hearts out on the night. It’s a chance to come together in some festive fun – in previous years we’ve even had passers-by join us! It really shows how much positive feeling there is among the public for changing Ireland’s abortion laws, for repealing the 8th amendment and working towards Free, Safe and Legal abortion in Ireland.”

Everyone is welcome to join in the singing and we strongly encourage the wearing of festive hats, scarves and woollies!

We look forward to seeing you there. You don’t have to be able to sing! Lyrics will be provided.