Why I’m Marching: We need to make noise for those who are silenced 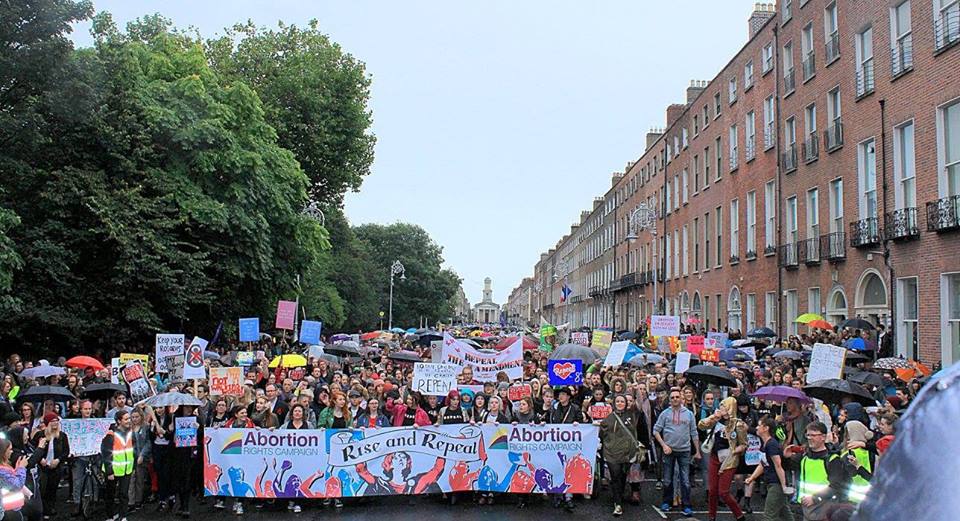 As we do every year, we’ve been asking you to tell us why you are marching in this year’s March for Choice. Thanks to all who have sent us your thoughts. In this post, Clare tells us why she thinks marching and protesting are essential to show solidarity with those most affected by the 8th. If you would like to tell us why you’re marching this year, please email [email protected]

Thousands of people are more than inconvenienced by the Eighth Amendment every year, and they’re usually silent and ignored. Protesting, chanting, sitting down in the street – that’s how we show solidarity with those forced to travel or forced to import safe but illegal pills to end their pregnancies.

I’m marching because I’ve marched every year since 2014. I’m marching because I didn’t use to march for anything, and marching for choice paved the way for me to march for lots of things. I used to think protest and demonstrations were pointless and had no faith in the power of collective action, but to quote Dylan: “I was so much older then, I’m younger than that now.” Refusing to take action was an easy option for me. It’s harder to care, because when you care you leave yourself open to disappointment. But it still beats not caring, no matter how exhausting caring gets.

People marched in 1983 against the Eighth Amendment. In 1992, people shut down O’Connell Bridge with a sit-down protest against the Courts-sanctioned incarceration of Ms X. This March, people did the same during the Strike 4 Repeal. Those who’ve decided it’s easier not to care grumbled that traffic was slowed and their day was inconvenienced. I’m sure plenty did the same in 1992. They didn’t seem to understand that that’s the point. Thousands of people are more than inconvenienced by the Eighth Amendment every year, and they’re usually silent and ignored. Protesting, chanting, sitting down in the street – that’s how we show solidarity with those forced to travel or forced to import safe but illegal pills to end their pregnancies. We make a fuss, get in the way, make things inconvenient for those who’d like to keep ignoring the injustice staring them in the face.

Those of us who have privilege need to use it for good: to advocate for those who don’t, who won’t be listened to by the powerful because they are from the wrong social class, or the wrong community, or have the wrong immigration status, or the wrong income bracket, or the wrong ethnic background, or the wrong sexuality/gender identity. The injustice of the Eighth affects everyone who can get pregnant, but its effects are not distributed equally. Those who can safely afford abortions and can access the information and have the right travel status need to fight and be noisy and make a fuss on behalf of those who can’t.

Marching isn’t a hostile act, even though some sections of the population and most of the media portray it that way. Making a fuss isn’t the same thing as being aggressive. What’s aggressive is a state that very “legally”, very politely, very firmly asserts control over your bodily integrity. Authority doesn’t have to be jackbooted and shouting to be oppressive and unjust. It can be very polite indeed, smoothly backing itself up with technical legal justifications and milky statements about the need for “balance” in a “divisive” debate. With blank looks and mealy words, state oppression of the human body quietly settles like a quilt over the minds of the nation. It’s only in the sudden, shocking cases, where the reality of this religiously-inspired state oppression is laid bare, that its true obscenity becomes apparent. The shock wears off after time, until the next scandal. This is why we need to keep marching, keep standing up, keep making a fuss, keep having those uncomfortable conversations with friends and family members. There can’t only be action when women suffer.

Change is really slow. Those who marched in 1983 and 1992, and in other years since, must be exhausted by how little things change. But then, they do change. Back in the 1990s being pro-choice was seen as fringe and weird. Now, even though anti-choice extremists have an unreasonable presence in the media, actually professing that you believe in forced pregnancy is not the automatic key to respectability it once was. In some cases, it’s the opposite. Change is slower than it should be, but it doesn’t happen at all unless people get active, speak up, speak out. The things we are doing now will create at least some of the change we want down the line.

Last year someone marched with me who hadn’t done it before. At the end they said “I was too shy to chant, but I wanted to”. That was me in 2014. Then in 2015, about halfway through, I was brave enough to chant. Now I start chanting solo and get others to join in. I didn’t get braver, I got stronger from being surrounded by comrades. It’s easy to be silent and stay uninvolved. It’s less scary, it’s safer. But it’s worth stepping in, stepping in, chanting, making a fuss, helping those who don’t usually have a voice to be heard. It’s not that hard and it’s worth the effort.

For all those reasons I will be marching again this year, and bringing people to march with me. You should too, in whatever way you can.

– Clare, Dublin via the midlands