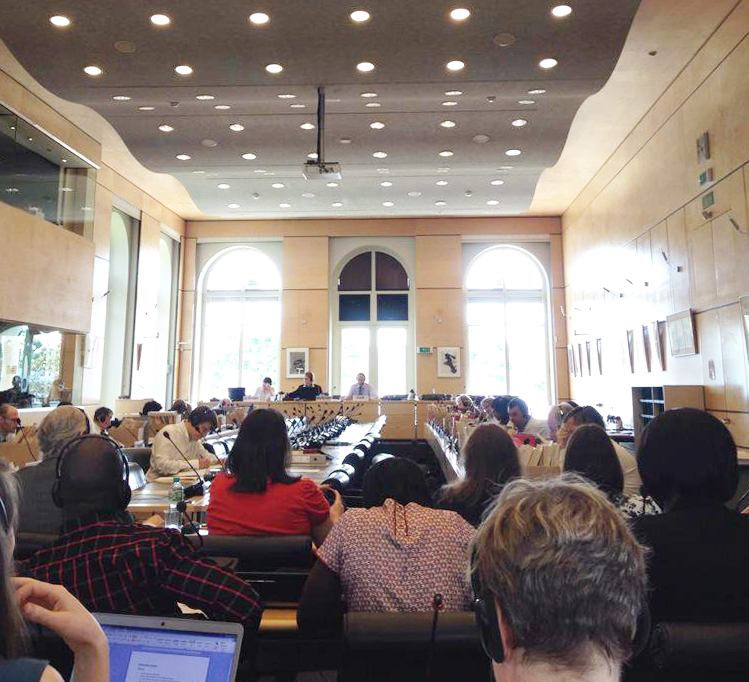 The Abortion Rights Campaign (ARC) and other pro-choice partners are present at the examination to bring the perspectives of rights holders- women and girls in Ireland who seek access to abortion services free from stigma and discrimination- to the attention of the Committee. Yesterday, oral statements were made by a range of civil society groups including a statement delivered by the Irish Family Planning Association (IFPA) on behalf of ARC and 10 other pro-choice groups.

During the Committee’s questions to the State on its human rights record, Committee member Ms Heisoo Shin noted that the Irish Government essentially endows the foetus with citizenship. She asked the Minister how the State reconciles the right to life of the foetus with the life and health of female citizens, observing that “it seems that the foetus is given precedence when the woman’s right to health is under threat.”

ARC Co-Convenor Sinéad Corcoran said, “the Committee’s observations on this point are critical. As ARC highlighted in its submission to the committee, the grounds for safe and legal abortion in Ireland are limited to the narrow circumstance where a woman’s life, as distinct from her health, is at risk. This is a gross derogation of the rights of women and girls, and in direct conflict with the human rights to health, which is incompatible with any law or policy which asks doctors to stand idle while a woman or girl suffers the avoidable and unnecessary deterioration of her health.”

Committee member Shin also enquired about how the state had implemented recommendations made by the Human Rights Committee in 2014. Last July the UN Human Rights Committee condemned the state’s restrictive abortion regime, with Committee Chairman Sir Nigel Rodley commenting that Ireland’s laws treats women as “a vessel [for incubating a pregnancy] and nothing more.”

The UN Human Rights Committee recommended that the state review and revise existing legal and constitutional barriers to abortion at least in the circumstances of rape, incest and fatal foetal abnormality; adopt a guidance document to clarity what constitutes a “real and substantive risk” to life, and consider making information on crisis pregnancy options more readily available alongside ensuring that health-care providers who supply information are not subject to criminal sanctions. The full text of their comment is available on the UN’s Website.

Other Committee members highlighted the problematic nature of the process required in order to amend any aspect of the Irish Constitution, enquiring whether upholding the minority rights always depends on the will of the majority, where discrimination is enshrined in the Irish Constitution. This remains a chief concern of ARC members who advocate for Repeal of the 8th Amendment, and bringing Ireland’s abortion laws in line with international human rights standards and norms.

ARC Co-Convenor Cathleen Doherty expressed concern that the Irish Government was effectively hiding behind the Constitution and requirement for a referendum, without taking action on this issue when they can. She said, “While the current Government continues to refuse to hold a referendum to repeal the Constitutional ban on abortion, international human rights mechanisms are critical to ensuring the State is held accountable for its continued de-prioritisation of women’s and girls’ health and human rights. Their inaction shows a continued failure of political will on this issue”

“We know that the Irish Government has a history of avoiding its duty of care to specific groups of people, and that international concern and solidarity is vital in supporting grassroots activists who are working on the ground in Ireland, continually pushing for discriminatory legal and constitutional provisions to be urgently reviewed and revised.”

At the close of the session, Committee member Uprimmy directly asked the Irish State why it does not hold a referendum on the constitutional prohibition on abortion if this remains the greatest impediment to Ireland bringing its abortion laws into conformity with international human rights standards and norms.