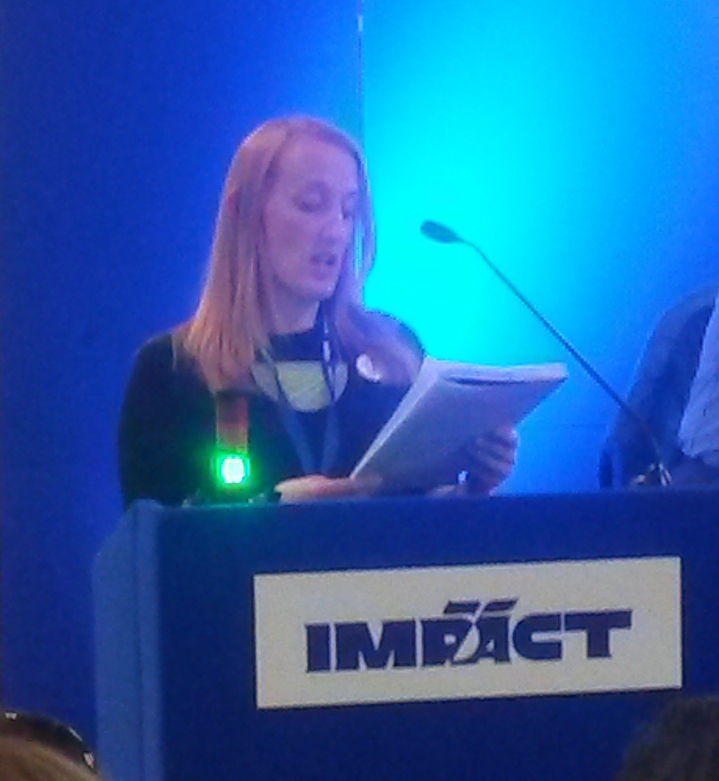 On Thursday, 7th May in Ennis the IMPACT Civil Service division showed over-whelming support for the Repeal of the 8th amendment to the Irish constitution.

The motion was proposed by Clare Butler, Abortion Rights Campaign activist and member of the IMPACT Architectural, Engineering and Heritage Services branch. A second similar motion was also on the agenda from the Probation Officers branch and both passed successfully.

Commenting on the achievement, Clare said “It was a very uplifting and encouraging experience. Overall four women stood up to passionately support the motion. We will be back for the national IMPACT conference next year and I’m very optimistic we will gain the same positive support.”

This motion was part of a coordinated effort through the Trade Union Campaign to Repeal the 8th Amendment group which is currently urging all pro-choice workers to encourage their unions to support the campaign.

“This conference calls on the Government to remove the 8th Amendment to the Constitution and to hold the referendum on this issue without further delay.

The 8th Amendment to the Irish constitution was brought in in 1983. Many people at the time campaigned against this change which equates the life of a pregnant woman with that of an embryo. They pointed out the many tragic and inhuman circumstances which could arise as a result. It is with great shame that time has proven them right and the worst has come to pass. The 8th Amendment is not good for women, in fact it is clear that for many is has been very bad and in some cases fatal. We have all heard of the appalling death of Savita Halappanvar in a Galway hospital in 2012. This story was brought to light publicly due to the efforts of her husband Praveen. However, Savita is not the only woman who has died or suffered in Ireland due to the 8th Amendment. Women’s lives do matter, this must come to an end.

Another grotesque consequence of this amendment, is that Irish families are forced to go full term with pregnancies they know with great certainty will not result in a birth. If a women discovers that her foetus will not survive outside the womb, she and her partner are forced abroad, without care or advice, to undergo termination procedures. The alternative – remaining pregnant, an ever swelling belly, excited questions from strangers and work colleagues – is too difficult for most of us even to imagine.

A 2013 Irish Times survey showed that 83% of people believed that abortion should be permitted in cases where the foetus is not capable of surviving outside the womb. 81% said abortion should be allowed in cases of rape or abuse. Even our health minister, Leo Varadkar has said the 8th amendment is too “restrictive”.

Please do not ignore the suffering of pregnant women whose health is at risk, who are victims of rape or incest, or whose foetus has fatal abnormalities. Whatever people’s personal views on abortion might be, the only way these issues can be addressed is with the repeal of this barbaric and dangerous law. I urge you all to support this motion.

Some of you may ask, is this a Trade Union issue? As a worker, as civil servant, as a card carrying trade union member and activist, but also as a 34 year old woman who is 30 weeks pregnant I assure you that it is. My right to health, to bodily autonomy and equal treatment is intrinsically linked to my ability to work. Half of the workforce are female and 100% of IMPACT members have sisters, female friends, daughters, nieces, female friends, partners or wives. I urge you all to support this motion.