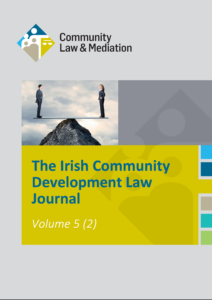 Three members of the Abortion Rights Campaign, Grace Wilentz, Sinead Corcoran and Naomi Elster recently published an article in the peer-reviewed The Irish Community Development Law Journal’s special gender equality issue. The article, “I am #Not A Vessel: The Impact of Pro-choice Grassroots Activism on Ireland’s UN Treaty Monitoring Body Examinations” explained why repeal of the 8th Amendment and free, safe legal abortion is essential for gender equality to become a reality in Ireland, and how ARC has made the voices of people on the ground heard by the UN.

Repeal of the 8th Amendment, and establishment of a framework for accessing abortion services that meets human rights standards and norms, are necessary steps towards achieving full gender equality in Ireland. The Abortion Rights Campaign (ARC) has not only been a part of advocacy efforts to bring the issue of restricted abortion access to the attention of UN Committees, it has also brought community activists and the voices of those affected by the 8th Amendment into dialogue with high-level UN processes.

The Abortion Rights Campaign and the Reality of Abortion in Ireland

The Abortion Rights Campaign (ARC) is a movement that calls for access to ‘free, safe and legal’ abortion on the island of Ireland. ARC asserts that the state must provide abortion services that are free of all social, legal or policy barriers that might unfairly hinder access; that prioritise physical and mental health, safety and full and informed consent of the pregnant person; and finally that are a legally enforceable entitlement protected by law.

Opinion polls over the last twelve years have consistently shown that the majority of people in Ireland want to repeal the 8th Amendment and expand access to abortion, with between 63 % and 87 % of people in support.

Since its beginnings in 2012, ARC has sought to give voice and visibility to those who feel expanded abortion access is urgently needed. ARC’s annual flagship event is the March for Choice, which brings tens of thousands of people onto the streets to urge the government to take action towards expanding access to abortion. ARC also organises speak outs where women can talk about their experiences of accessing abortion in a safe and supportive environment, provides capacity-building trainings to regional groups, busts myths about abortion and raises public awareness of evidence and lived experiences.

Abortion is a reality in Ireland. According to the UK Department of Health and the HSE’s Crisis Pregnancy Programme, over 160,000 abortions that took place in England and the Netherlands since 1980 were performed on women who gave Irish addresses. This figure averages to nearly 12 women a day who leave Ireland to access safe and legal abortion services in other countries. Additionally, in 2014, 1,017 abortion pills were seized and it is unknown how many have been successfully imported by people forced to self-administer in isolation and secrecy because of the criminal penalties facing any woman or girl who accesses an illegal abortion.

During periodic reviews of Ireland’s human rights record, multiple UN Treaty Monitoring Bodies have condemned Ireland’s restrictive abortion regime, calling on the State to take all steps necessary to review and revise its laws and Constitution.

ARC’s engagement with human rights treaty monitoring body reporting and advocacy began in 2014 when ARC’s Policy and Advocacy Team drafted a submission to the UN Human Rights Committee during the Irish State’s examination by the Committee under the International Covenant on Civil and Political Rights (ICCPR). ARC argued that Irish law was in violation of Articles 6 (right to life), 7 (right to be free from cruel, inhuman and degrading treatment) and 26 (right to be free of discrimination) of the International Covenant on Civil and Political Rights. The re-criminalisation of abortion in almost all circumstances and potential-14 year prison sentence under the Protection of Life During Pregnancy Act 2013 reinstated dangerous, archaic, and unnecessary legal provisions criminalising abortion, directly contravening human rights norms. The fact that the State allows women to travel to access abortion services while maintaining criminalisation in Ireland amounts to discrimination against women who are unable to travel due to their migration or health status, disability, socio economic circumstances or other factors. Finally and perhaps most importantly, ARC highlighted that the State repeatedly referenced the 8th Amendment as the reason it could not expand abortion access; while simultaneously neglecting to mention that the State itself may call a referendum to remove the Amendment.

The Committee’s response was unequivocal, with the Committee Chair Sir Nigel Rodley stating in his closing remarks that Irish law treated women who were raped as “a vessel and nothing more”.In the days and weeks following the hearings, media at home and abroad reported on the Irish State’s unquestionable violation of the ICCPR, increasing national and international pressure for action. ARC’s media team immediately coined the #notavessel hashtag which went viral on Twitter within hours and quickly became a unifying rallying call as women all over the world tweeted photos of themselves with a caption of #notavassel.

The following August, the UN Human Rights Committee made several recommendations on abortion policy including most notably that the State should “[r]evise its legislation on abortion, including its Constitution, to provide for additional exceptions in cases of rape, incest, serious risks to the health of the mother, or fatal foetal abnormality.”

In 2015, ARC participated in Ireland’s review under the International Covenant on Economic, Social and Cultural Rights (ICESCR). Ireland had not been reviewed under this treaty since 2002. ARC’s submission to the committee centred on Article 12 of the Convention, which defines the right to health as, “the right of everyone to the enjoyment of the highest attainable standard of physical and mental health.”

Requiring women to travel to another country for health services is by definition inaccessible and entirely impossible for some women. Ireland’s abortion laws create a two-tiered system where women and girls with the means and the ability to do so can make reproductive choices while others are forced to continue their pregnancies against their will.

ARC spoke to women about their experiences in order to highlight the full range of economic costs involved, which included travel, accommodation, childcare, the cost of the procedure itself, loss of income arising from time off work, and for some, counselling to cope with the isolation and stigma faced upon returning home. We highlighted the fact that the current constitutional and legislative framework discriminates against those for whom travelling abroad to access healthcare may not be an option.

Over the course of the two-day examination, the UN Committee on Economic, Social and Cultural Rights asked the State how it planned to reconcile the contradiction between the Constitution and women’s right to health as provided under the ICSECR, particularly where a woman faces a risk to her health and requires access to abortion. The State’s response failed to answer the question directly and merely stated that the constitution prevents any increased access to abortion in Ireland.

The Committee criticised “the discriminatory impact on women who cannot afford to get and abortion abroad or access to the necessary information.” This UN Committee further recommended that the State take all necessary steps, including a referendum on abortion, to revise its legislation on abortion, including the Constitution and the Protection of Life During Pregnancy Act 2013, in line with international human rights standards.

In early 2016, Ireland was reviewed under the UN Convention on the Rights of the Child (UNCRC). ARC was the only NGO that travelled to the hearing in Geneva to advocate on the issue of abortion access. Some ARC members reached out to Akidwa: Ireland’s National Network of Migrant Women, to support their young migrant women’s group in developing a submission on a range of issues including Ireland’s direct provision system, educational equality, and sexual and reproductive health and rights. These first person case studies broke through the policy and legal analysis and the facts of historic cases to reveal the real voices of the young women and girls who are most impacted by the 8th Amendment.

Within ARC, we agreed that although the sexual and reproductive health and rights of adolescents girls and young women can be a sensitive subject, our participation in this particular review was vital. Many of the landmark cases that highlighted the cruelty of Ireland’s abortion laws involved adolescent girls and young women: Miss X, Miss C, Miss D and Miss Y. The girls and young women at the centre of these cases were among some of the most marginalised in our society. Miss C was a member of the Travelling community, Miss D was in the care of the state, Miss Y was an asylum-seeker looking for the state’s protection. Almost all were survivors of sexual violence.

Their cases serve to highlight just how discriminatory Ireland’s abortion laws are – the most marginalised women and girls bear the full burden of the abortion ban, while the more privileged can get around it by travelling abroad for a termination. It is not surprising, then, that the UN Committee on the Rights of the Child questioned the State on how it could reconcile the ban on abortion with its obligation to provide adolescents with appropriate medical services in line with the Convention. When the Committee asked about the situation of girls who are victims of rape and incest, they were told by the State that there is no provision for these girls unless they are suicidal. Lastly, the question was raised as to whether the government intends to consult the people of Ireland to hear their opinion with regard to the 8th Amendment of the Irish Constitution.

Following on from the persistent questioning during the review, the UN Committee on the Rights of the Child issued its concluding observations, which reinforced the calls of the Human Rights Committee and the Committee on Economic Social and Cultural Rights and highlighted Ireland’s obligation to decriminalise abortion in all circumstances.

By participating in periodic reviews of Ireland’s human rights record by UN Treaty Monitoring Bodies, ARC has contributed to focusing increased international attention on the ways Ireland’s abortion laws violate human rights. The Concluding Observations and recommendations issued to Ireland contain some of the clearest, most unequivocal language on right of women and girls to access abortion services. These outcomes are not only of significance for our movement for reproductive rights, they have a global impact.

To our knowledge, ARC is the first Irish pro-choice organisation to involve rights holders directly in reviews and to feature their first person testimonies in submissions. In this way, ARC has done some trailblazing work in changing how local-level actors can shape the outcomes of high-level advocacy processes and how high-level committees can lend support and legitimacy to grassroots struggles.

The next review of Ireland’s human rights record is approaching in 2017 and it will be examined on whether it is fully meeting its obligations under the UN Convention on the Elimination of All forms of Discrimination Against Women. We at ARC look forward to participating in and to further connecting our national and local-level grassroots activism with high-level human rights processes towards advocating for meaningful change in the lives of women and girls in Ireland.