The Defenders of Life: Pro-Choice Activism in Honduras and Ireland 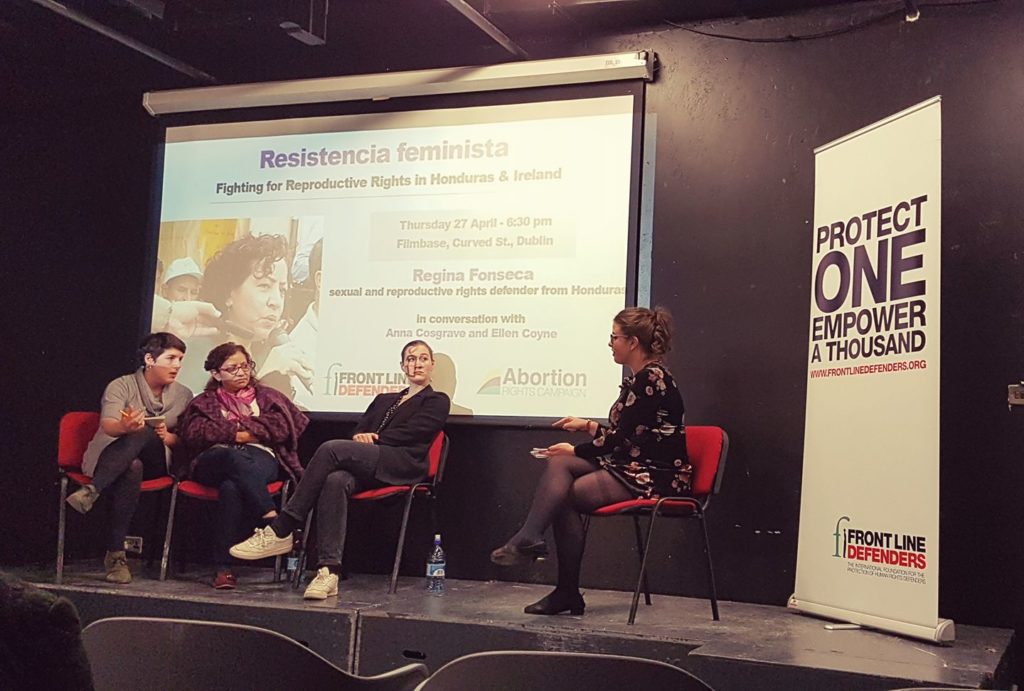 Regina Fonseca (speaking through a translator) & Anna Cosgrave of the Repeal Project in conversation with Ellen Coyne last month.

Rarely do activists have the opportunity to openly share and learn from their siblings who are working on similar issues in different countries or regions. However, when those unique and fleeting opportunities for cross-learning arise, activists seize the moment.

Members of the Abortion Rights Campaign, Frontline Defenders and other pro-choice activists participated in a thought-provoking and motivational discussion last month with Anna Cosgrave of the Repeal Project and Regina Fonseca, a human rights defender (HRD) from Honduras. Regina has been fighting for over 30 years for gender, sexual, and reproductive rights in Honduras, where abortion is criminalised in all circumstances.

Throughout the event, the parallels between the Irish and Honduran contexts were undeniably clear. Abortion is criminalised, women are at risk daily, and the state and conservative Christian groups are inextricably linked. Much like in Ireland, in Honduras, Christian groups, both Protestant and Catholic, exert their power and influence in the media in local and national politics and through the health and education systems. This reality, in combination with a lack of accountability for those who seek to harm HRDs in Honduras, means that the price of activism is high.

Despite the similarities faced in both countries, it became clear to the Irish activists in the audience that the stakes for working for free, safe, and legal abortion in Ireland are unlike those in Honduras, where activists face ubiquitous threats and harassment to not only themselves, but also to their family. Regina acknowledged that she and her colleagues are often labelled murderers and their children or family members are targeted by opponents who seek extreme ways to harass and intimidate them in order that they abandon their struggle.

If only these tactics worked. Regina is a mighty force, and her most poignant advice to Irish activists was to ignore the negativity and harassment they face. Whether it be trolling online or outright threats and harassment, she affirms that it is necessary to shut out the intimidation and remain focused on the goals and the work.

For Irish activists, that may seem to be easier said than done. Yet, Regina’s key point throughout the discussion, and the most salient piece of advice she provided, gives us a window into her ability to concentrate and to stay motivated despite the risks and setbacks. Regina  impressed us all when told us that the work she is doing is not for her, and not necessarily for the present; her work is for the next generation, for the future, a gift to pass along to those who come next. She acknowledges the long-fought history for women’s voting rights in Honduras, and of those who came before her who did not see their work manifest in real, tangible change. Like the women who fought for the right to vote in Honduras, Regina is helping to build a platform from which future activists can build upon.

Attendees heard an enduring lesson in patience, care, and dedication from a fellow activist whose wisdom is key for the Irish movement to Repeal the 8th. As Anna stated during the discussion, “We need free, safe, and legal abortion, and it would be an insult to Irish women to be working for anything less”. With the recent results from the Citizens’ Assembly, we can only think that this possibility is within our grasp. And yet, if we face setbacks, delay, or sabotage in our work, as we heard from Regina, we must continue to focus on building the movement for those who will follow in our stead. Our work is tied to the generations before us, and those to come, and we will persist, knowing that, like Regina, “We are defenders of life”.