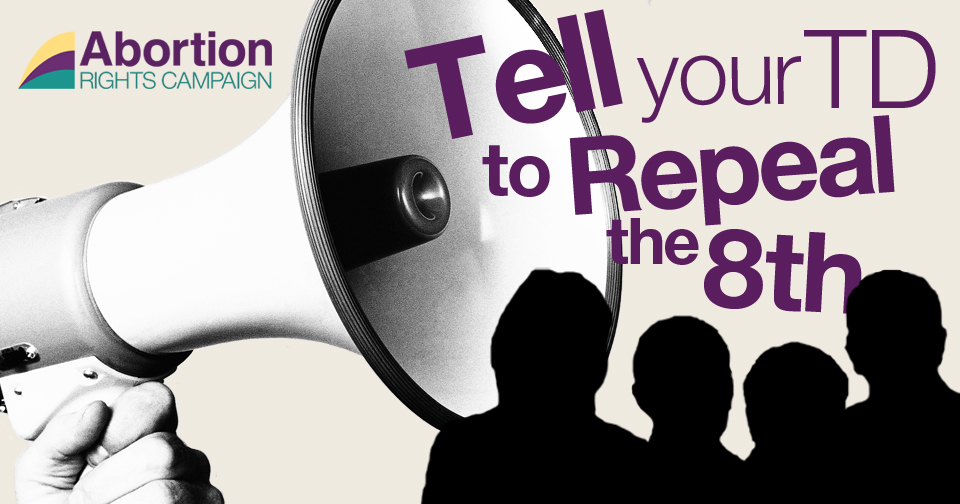 We recently  asked you to contact Micheál Martin (FF), Gerry Adams (SF), Joan Burton (LAB) and Leo Varadkar (FG) . We don’t have much time left on this, so now we are asking you to email the TDs in your constituency as soon as you can ask them to vote in favour of the Private Member’s Bill to hold a referendum to repeal the Eighth Amendment. Opponents to women’s rights are doing all they can to stop this Bill proceeding so please make your voice heard and let your TD know that you are in favour of repealing the Eighth Amendment and that they should be too.

I am writing to ask that you vote in favour of the Private Member’s Bill to hold a referendum to repeal the Eighth Amendment on the 12th of May and allow it to proceed to Committee Stage. We recognise that the government broadened access to legal abortion in 2013 with the Protection of Life During Pregnancy Act – but introducing a law that says a woman’s life has to be at risk of death before she can access a legal abortion is simply not enough.

This law is dangerous and the people of Ireland want it changed. In September 2014, a Sunday Independent/ Millward Brown poll found that of those who expressed an opinion, over 75% of people surveyed were in favour of holding a referendum to repeal the Eighth Amendment of the Constitution. No person under the age of 49 has had an opportunity to have their say on this unfair, unjust and inhumane law. This has to change.

You have an opportunity to to make a real impact on women’s lives right now.