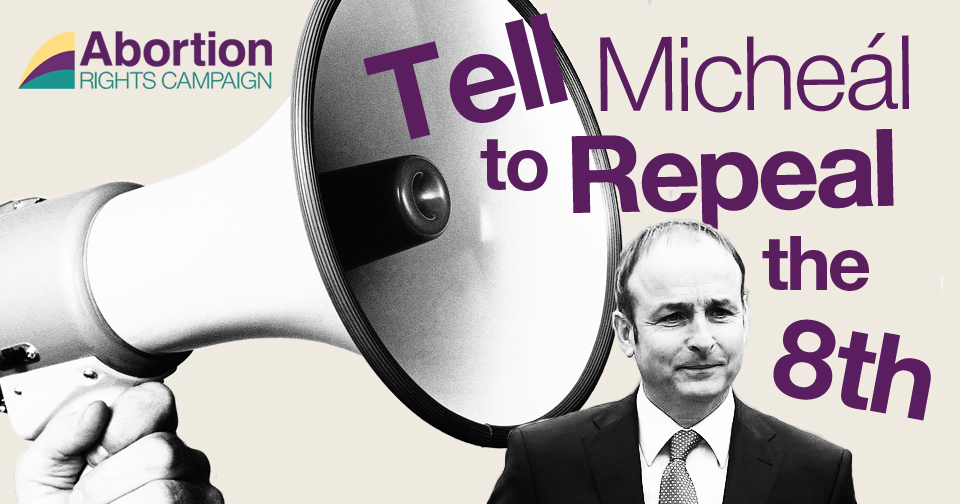 Since the Fianna Fáil Ard Fheis in April, it is now policy to ‘maintain the 8th Amendment’. Join us in letting party leader Micheál Martin know that they are making a big mistake. The motion was voted on by a very small percentage of the party’s members.

You can contact Micheál in a variety of ways:

I am writing to you in advance of the upcoming debate and vote that will take place over the next week on whether or not to call a referendum to repeal the 8th Amendment. I know that a very small percentage of party members voted on a motion to ‘maintain’ the 8th Amendment at the Ard Fheis, but this is a mistake and the decision should be revisited.

Public opinion on abortion access in Ireland is broad and varied, it is not simply two opposing sides with two polar perspectives. There is support for access across the entire spectrum of ‘choice’ and failing to recognise that is very unwise going into an election year. The majority of people in Ireland support broadening legal access to abortion whenever the foetus cannot survive outside of the womb (83%), when the pregnancy is the result of a  sexual crime (69%) and when the pregnancy poses a risk to a woman’s health (68%).  In September 2014, a Sunday Independent/ Millward Brown poll found that of those who expressed an opinion, over 75% of people surveyed were in favour of holding a referendum to repeal the Eighth Amendment of the Constitution – and so I ask you to use your position to appeal to your colleagues in the party and the Dáil.

Today, twelve women have made the journey to the UK to access abortion services, and many more have administered medication illegally at home, in order to have abortions. We should not have to beg for healthcare. This cannot continue.

Fianna Fáil cannot afford to be so out of step with the majority will of the people in Ireland.