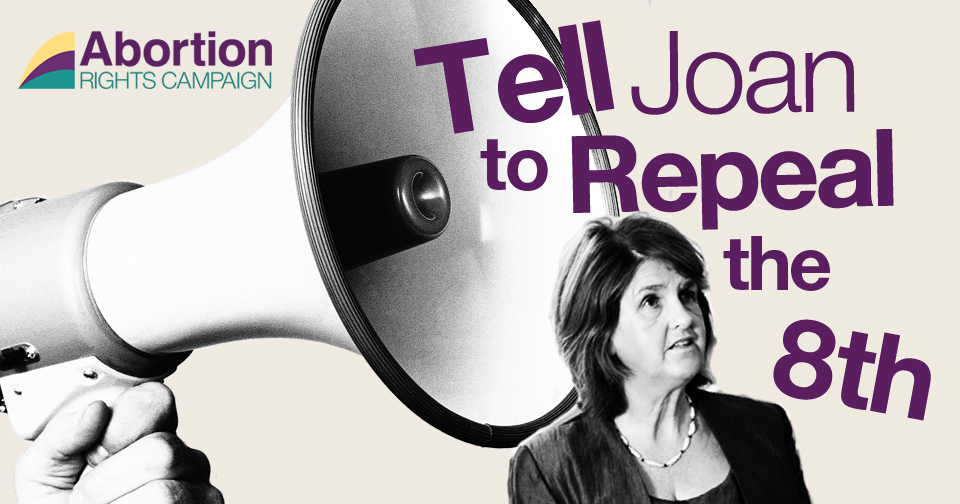 The Labour Party has said that it favours legislating for abortion beyond there being a risk to the life of a woman, including a risk of suicide to include legal provision for abortion where there is a fatal foetal abnormality or a risk of significant injury to the physical health of a woman – this would require a repeal of the Eighth Amendment.

You can contact Joan in a number of ways:

I am writing to ask that you and your party vote in favour of the Private Member’s Bill to hold a referendum to repeal the Eighth Amendment on the 12th of May. In 1983 the Labour party stood firm in favour of women’s rights and were opposed to the to the Eighth Amendment. Indeed you have also said that this amendment “does not actually serve women well when issues of their life, their safety, their health, are in question.”

The Labour Party has also said that it favours legislating for abortion beyond there being a risk to the life of a woman, including a risk of suicide to include legal provision for abortion where there is a fatal foetal abnormality or a risk of significant injury to the physical health of a woman – which would require a repeal of the Eighth Amendment.

This could be the final opportunity the government has to better the lives of women in Ireland by safeguarding them against unnecessary risks to their health, and by sparing them the trauma and stigma that accompanies the restrictive laws which force women to travel overseas to access healthcare.

We acknowledge that the government broadened access to legal abortion in 2013 with the Protection of Life During Pregnancy Act – but this law is not enough. If the Eighth Amendment remains in place, we will see more women suffering unnecessary trauma and more court cases against the state.