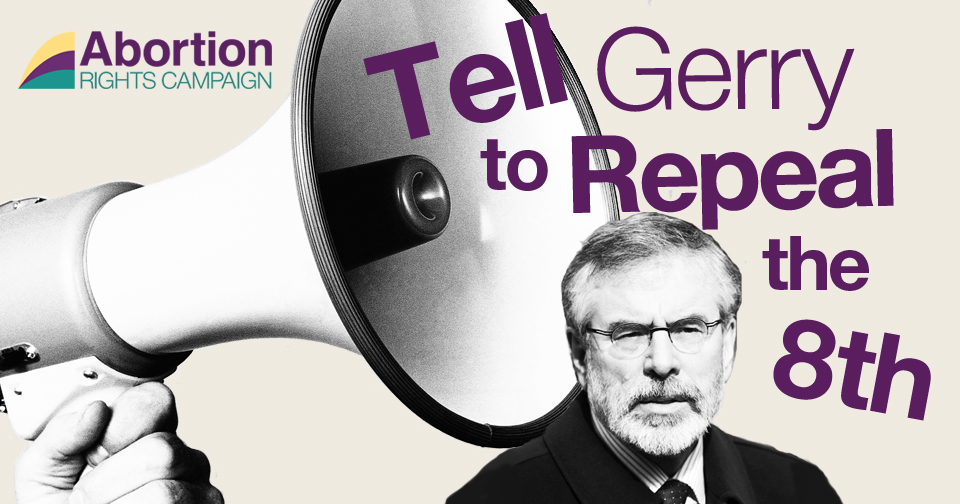 Sinn Fein passed a motion at the most recent Ard Fheis supporting a repeal of the Eighth Amendment. Today, let’s ask him to keep to the word of his party’s policy and ensure that Sinn Fein TDs vote in favour of this Bill.

You can contact Gerry in a variety of ways:

Suggested subject line: Will you keep your word and vote to repeal the Eighth?

I am writing to you to ask that you vote in favour of the Private Member’s Bill to hold a referendum to repeal the Eighth Amendment on the 12th of May.

This could be the final opportunity this government to better the lives of women in Ireland by safeguarding them against unnecessary risks to their health, and by sparing them the trauma and stigma that accompanies the restrictive laws which force women to travel overseas to access healthcare.

Since election in 2011, the government has presided over and administered laws that resulted in the death of Savita Halappanavar, the cruel treatment of Ms Y and most recently, the heartbreaking case of P.P., a clinically dead woman kept alive artificially against the wishes of her family so that her foetus could be kept alive. The government broadened access to legal abortion in 2013 with the Protection of Life During Pregnancy Act – but in the narrowest of terms. If a woman’s life is at risk and an abortion can save her, health-care professionals can now legally perform an abortion.

But this law is not enough.

If a woman’s physical or mental health is at serious risk, or if she has been raped, or is a victim of incest, or is too poor, or even if there is a diagnosis of fatal foetal abnormality in her much wanted pregnancy, she cannot access an abortion. The government are out of touch with public opinion on this issue. In September 2014, a Sunday Independent/ Millward Brown poll found that of those who expressed an opinion, over 75% of people surveyed were in favour of holding a referendum to repeal the Eighth Amendment of the Constitution.

We commend Sinn Fein for passing a motion at the most recent Ard Fheis supporting a repeal of the Eighth Amendment.  That is why we are asking you, Deputy Adams, as the leader of Sinn Féin, to keep to the word of your party’s policy and ensure that Sinn Fein TDs vote in favour of this Bill.

Sinn Fein have said they are committed to building a new republic based on the principles of freedom, justice and equality –  but there will be no freedom, justice or equality for women while the Eighth Amendment remains a part of the Constitution.

Please ensure the wellbeing, the health, and the dignity of every citizen by voting to repeal the Eighth Amendment.