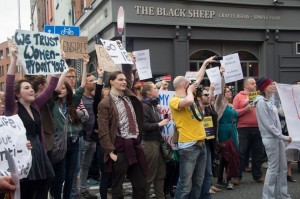 A spontaneous protest occurred on Friday June 28th outside the Life House on Capel St. in a direct response to a series of incidents involving the Anti-Choice group ‘Youth Defence’. The group were under fire this week for parking one of their mobile billboards outside the Dublin Rape Crisis Centre.

This photograph appeared on Broadsheet on Thursday June 27th.

Youth Defence were quick to respond to the incident – saying the billboard “was not parked opposite the Rape Crisis Centre as claimed by Broadsheet [..] Furthermore, he [the driver] is completely unaware of what businesses / organisations are in Lesson Street, to say that he intentionally did this to offend anyone is scurilous [sic].”

The Advertising company – ‘AdMobile’ have however decided to discontinue their relationship with the client saying “We’re a business like any other and have to pay bills, but judging by the sentiment to this incident, we’ve taken this decision at a loss to ourselves.”

Later that evening this article was published in Rabble. It transpired that the meeting being advertised by the latest spate of billboards and posters for June 22nd never took place. The Dublin City Council accepted Youth Defence at their word – that there had been a clerical error somewhere along the way – and decided not to fine them for postering illegally.

“I guess the van parked outside the Rape Crisis Centre was the final straw. I’ve had a problem with the tactics employed by Youth Defence for some time. I was abroad last year when that infamous billboard campaign began so I really wasn’t in a position to do anything, the discontent and frustration has been steadily increasing ever since then.

I decided the time had come for me to take action, I wanted to show Youth Defence their actions will not be tolerated. They may have more money than we do but they do not have the people behind them.

The atmosphere  on Friday was incredible. I think people saw it as a way to ‘fight back’ against this faceless, bigoted organisation – who seem to operate outside of the law in so many different ways.  There was a real sense of motivating hope, that we could assemble en masse like this in less than 24 hours.

It was a peaceful event with no physical altercations. Some member of ‘Youth Defence’ were incredibly inflammatory and provocative – attempting I’m sure to illicit equally heinous responses – but we did not let them hijack the event and kept it about YD’s behaviour – the real reason we were there”

Protesters were joined on the day by Sinead Kennedy from Action on X who announced their plans to counter demonstrate the Youth Defence ‘Rally for Life’ event taking place on July 6th.

Want to get out on the streets?

Find out more about the AoX counter demo here