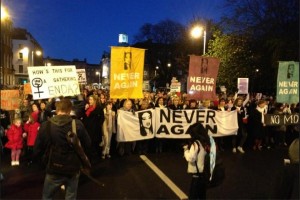 Photograph thanks to ‘Shirley Temple bar’

Commenting, spokesperson Sarah McCarthy of the Abortion Rights Campaign said, “In the words of the report’s chairman, Professor Sir Sabaratnam Arulkumaran, legislative factors interfered with medical considerations. He also confirmed that had it been his medical decision, he would have terminated the pregnancy. We consider it utterly appalling that in today’s Ireland, medical staff had their job of saving a woman’s life and health made more difficult by Irish law.”

Also commenting, spokesperson Órlaith Reidy said, “It’s very worrying to know that today’s draft legislation won’t prevent the possibility of this happening again to another pregnant woman presenting with an early second trimester miscarriage. We can’t allow again a foetal heartbeat to be put before a woman’s life. The eighth amendment to the Irish constitution must now be repealed. “