Press release: The constitutional impediment to abortions in Ireland is gone 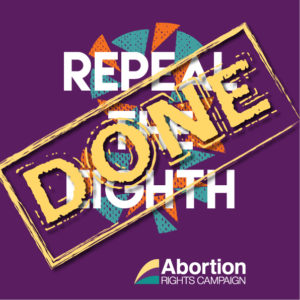 On the anniversary of the 8th Amendment being voted in, the Abortion Rights Campaign welcomes today’s decision by the Supreme Court that clears the way for abortion legislation to proceed in the Dail.

Speaking this afternoon, Linda Kavanagh, spokesperson for the Abortion Rights Campaign said “It was frustrating to see these attempts to block the will of the people of Ireland, but we’re glad to see that this obstruction has been cleared away. Now more than ever we most focus on bringing in legislation and services to provide abortion care to everyone who needs it in Ireland.”

She continued “While legal challenges are part of the democratic process, we are relieved that this petition is finally dismissed. It was another in a long line of stalling tactics which the people of Ireland have had to endure while waiting for the full range of reproductive healthcare options here at home.

Since 66% of voters said “Yes” in the referendum on May 25th, over 1000 people have travelled to get abortion care, and others have imported safe but illegal abortion pills. We now must ensure that no one gets left behind when legislation and guidelines are introduced.

We’re marching on September 29th to demand that this legislation ensures the free, safe and legal abortion care that we have always asked for, and that the Irish people voted for on May 25th.”