Press Release: Group of organisations to raise common points and reservations regarding Protection of Life during Pregnancy Bill 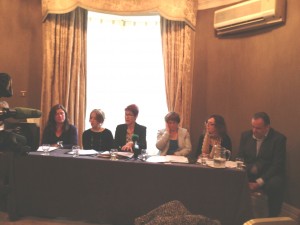 Following the Oireachtas hearings with medical and legal experts on the Protection of Life during Pregnancy Bill, a group of 11 organisations not represented at the hearings come together today at a press conference to demand a range of changes to the proposed legislation. Representatives of the organisations collectively called for the following amendments to the Bill:

Criminalisation: the proposed legislation replaces the Offences against the Person Act 1861 rather than repealing it.  The government must repeal the relevant sections of the Offences against the Person Act 1861 and decriminalise abortion.  Criminalisation does not work; it causes pain and suffering to women, is incompatible with international human rights norms and according to the ECHR has a chilling effect on women and doctors

2.      Risk of loss of life from self-destruction

There is no medical or clinical justification for the requirement that a panel of doctors authorise an abortion on grounds of risk to life arising from risk of suicide due to an unwanted pregnancy. The requirement of a second psychiatrist does not apply when a pregnancy is not involved. The Mental Health Act 2001 requires only two medical practitioners to authorise the involuntary detention of an individual on mental health grounds, including risk to life by suicide. The proposed legislation requires up to seven practitioners to assess risk to life by suicide due to an unwanted pregnancy and authorise a termination on grounds of such a risk to life.

An arbitrary distinction is being drawn between physical risk to life and risk to life arising from risk of suicide due to an unwanted pregnancy. The current proposal requires unanimity between an obstetrician and two psychiatrists for the approval of abortion, giving the obstetrician – with no competence in suicide assessment power of veto over two consenting psychiatrists.  Consultation with the woman’s GP should only take place with her prior consent.

There should be an explicit duty to treat in a medical emergency regardless of any conscientious objection.  Legislative provision must be made to ensure that medical professionals are required to declare anti-choice views, and that they have a duty to absent themself from any panel deciding on abortion.  Any panel should only consist of non-conscientious objectors.  It must be ensured that non-objecting providers are accessible and available throughout the country.

A two-week review period is unrealistic and could result in serious and potentially fatal repercussions. Best international practice is that a decision is made within 3 days.  Realistic timeframes must be included in the new legislation.

5.       Broaden the scope of the legislation to include fatal foetal abnormalities and pregnancies resulting from rape and incest.

Organisations supporting these changes include:

What: Press Conference – Common points and reservations on Protection of Life during Pregnancy Bill

One thought on “Press Release: Group of organisations to raise common points and reservations regarding Protection of Life during Pregnancy Bill”