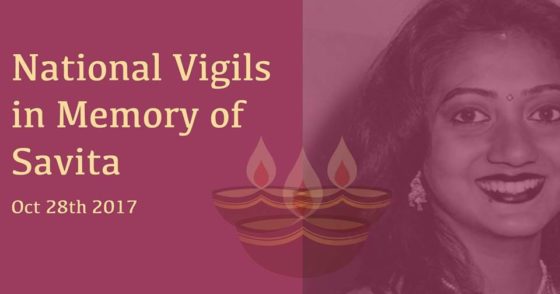 Members of the Abortion Rights Campaign will be attending the Coalition to Repeal the Eighth Amendment vigil in memory of Savita Halappanavar outside the GPO at 4pm on Saturday, 28 October. Members and regional groups are also attending and organising vigils at over 20 locations around the country and abroad. Savita’s tragic and unnecessary death took place five years ago, on October 28 2012.

These vigils are a response to a call for solidarity from Galway Pro-Choice, who have taken the lead over the last five years in commemorating Savita in the city she lived and worked in. Vigils will be silent, and members of the public are invited to bring along candles or flowers.

ARC spokesperson Linda Kavanagh said “the 5 year anniversary of the death of Savita is a stark reminder of how far we still need to go, and the work we need to do wo to ensure that women and pregnant people are no longer hurt or damaged by the 8th Amendment.”

She continued “We will never forget Savita and we are working towards a supportive healthcare structure that emcompasses all reproductive choices including abortion. The people of Ireland value women and we cannot stand by while more women are hurt, exiled or shamed because of our abortion laws. We strive for free, safe and legal abortion for everyone who wants or needs one, so that no more lives are put at risk by our laws.”