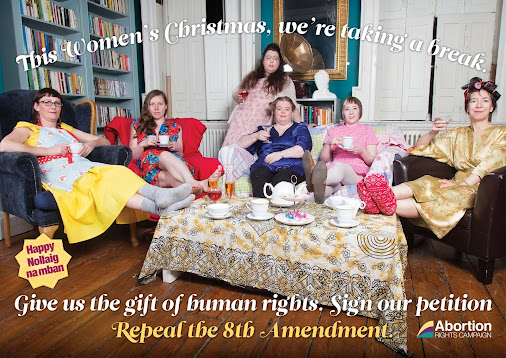 Established in January 2013, the Abortion Rights Campaign (ARC) has had a busy first year. We have been working hard toward an Ireland with free, safe and legal access to abortion. We now join with a number of pro-choice and equality groups across the country to take advantage of the rest offered by Nollaig na mBan. We will take a one-day break from active campaigning during which we are asking others to help out and sign the petition to repeal the Eighth Amendment.

The petition to repeal the Eighth Amendment is available on the ARC website, and will be shared in hard copy across the country in the coming weeks.

Joseph Loughnane of Galway Pro-Choice said: “As Women’s Christmas is a day that traditionally and condescendingly gave women the day off from the “womanly duties”, it is a perfect time to take a one-day-only break from campaigning to spread the word about the problems with the Eighth Amendment to the Constitution of the Republic of Ireland. Ultimately the Eighth Amendment does not reflect the beliefs and actions of the majority of people in Ireland, so today is a day for those people who may not realise the true nature of the Amendment to start speaking out and calling for the repeal of the Amendment.”

Alan Gibson of Cork Women’s Right to Choose Group adds: “The Eighth Amendment equates the right to life of a pregnant woman with that of an implanted embryo. This archaic and dangerous law infringes on the human rights of women in Ireland and flies in the face of international human rights norms by denying access to basic health care, forcing over 150,000 to travel overseas to obtain an abortion since 1980 and criminalising those who self-administer abortion pills in Ireland. The Amendment has been used to maintain a false and medically dangerous distinction between risk to health and risk to life and discriminates against those who cannot travel to obtain abortions.”

Spokesperson for ARC Janet Ní Shuilleabháin says: “This petition is just one part of a march toward a referendum to repeal the Eighth Amendment. We are looking forward to collaborating with the broad coalition of groups, individuals and politicians who are coming together to repeal the Amendment in the future. There have been many years of struggle for access to health and rights, and there is a way to go yet. So we take a one-day break as we start in on the work of the next several years, bring us to a referendum that will repeal the Eighth Amendment and make Ireland a safe, healthful place for all of its residents.”