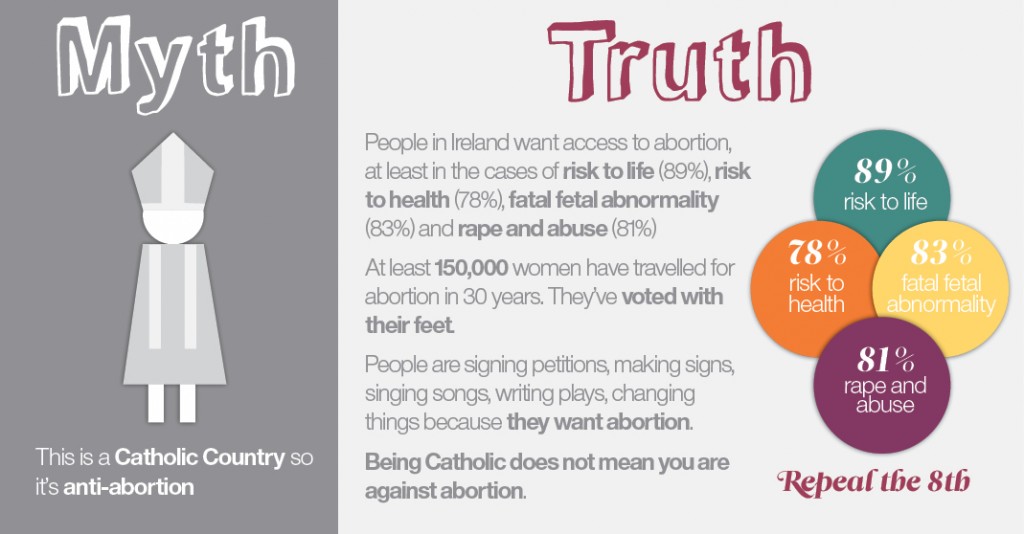 Welcome to Day 8 of ‘8 Days – 8 Reasons to Repeal the 8th’, where each day running to International Women’s Day, Abortion Rights Campaign have been busting 1 common myth about abortion in Ireland.

This is our 8th myth for International Women’s Day, tweet your own at us @freesafelegal and using #RepealThe8th.

Truth #8: Being Catholic does not mean you are anti-abortion. At least 150,000 women have travelled from Ireland for an abortion in the last 30 years.

With the signing into law of last year’s Protection of Life During Pregnancy Act, Ireland still has, along with Malta, the most restrictive abortion laws in Europe.

The people of Ireland, however, have repeatedly and increasingly shown their support for wider access to abortion in Ireland. This change in opinion on abortion since the signing into law of the Eighth Amendment in 1983 has been remarkable. According to last year’s Ipsos MRBI poll in the Irish Times, the overwhelming majority of people in Ireland now support a woman’s right to choose abortion at least in the cases of risk to life (89%), risk to health (78%), fatal fetal abnormality (83%) and rape and abuse (81%).

With the possible exception of cases of fatal fetal abnormality (legal opinion differing here), legislation validating current Irish opinion on abortion is impossible without repeal of the Eighth Amendment.

The only recent opinion poll that has shown a supposed majority in favour of ‘constitutional protection of the unborn’ was one commissioned by the Pro Life Campaign (PLC). (Note that favouring such constitutional protection would not be in any way incompatible with favouring wider access to abortion, yet the PLC framed this poll as contradicting the Irish Times poll, which asked a completely different set of questions.) Let’s leave aside any consideration of the potential impartiality of a poll commissioned by a group with vested interests in the abortion debate and look at the questions asked.

Q1. In current medical practice in Ireland, the doctor treats the expectant mother and her baby as two patients and does his/her best to safeguard both in a crisis situation. Do you consider that this practice should be protected and safeguarded by law or not?

Q2. Are you in favour of, or opposed to constitutional protection for the unborn that prohibits abortion but allows the continuation of the existing practice of intervention to save a mother’s life in accordance with Irish medical ethics?

Problem 1: These are leading questions padded with emotionally loaded motherhood-and-apple-pie best-case scenarios and presuppositions of medical consensuses that gloss over the lack of clarity (then as now) in Irish abortion law. ‘What marks these findings out from other research,’ remarks Caroline Simons of the PLC, ‘is the way important ethical distinctions are clarified for the benefit of respondents.’ How thoughtful! But what if respondents disagree with these positively Orwellian PLC-sanctioned ‘ethical distinctions’? (The distinction underlying the second question has no currency in modern medicine—another myth for another day.) ‘No, but…’ or ‘yes, but…’ not being available as answers, it’s perhaps best to leave the ‘ethical distinctions’ to the individual respondent and just ask the questions—as the Irish Times poll did.

Problem 2: The respondent is asked to answer either ‘yes’ or ‘no’ (or claim no opinion) to double-barrelled questions: ‘Do you consider […] or not?’; ‘Are you in favour of, or opposed to […]’ The second question is arguably quadruple-barrelled: a double-barrelled question about two distinct elements of Irish medical ethics (‘protection for the unborn’ and ‘intervention to save a mother’s life’). Confused yet? We don’t blame you: this is staggeringly poor polling methodology.

All in all it’s perhaps little wonder that the results of the PLC’s poll differ drastically from those of every other recent Irish opinion poll on abortion.

Over 30 years have passed since the 1983 ‘pro-life’ referendum. The youngest voters, the eighteen-year-olds, in 1983 are now 48 or 49 years old. Since 1980 well over 150,000 women are known to have voted with their feet and travelled overseas for abortion services. The results of four separate referenda since 1983 have also shown that the majority in Ireland support wider access to abortion. (Of course, the results of these referenda are frequently misrepresented by anti-choice voices. Again, another myth for another day.) New generations are now getting active, singing songs, writing poetry, organising, marching, making their voices heard and instigating and advancing real change because Ireland wants and needs safe, legal abortion.

The false notion of a ‘pro-life’ majority derives in many instances from the fact that Catholicism is the dominant religion in our part of the world. However, a Catholic identity and a pro-choice position are not mutually exclusive, as Catholics for Choice articulately point out.