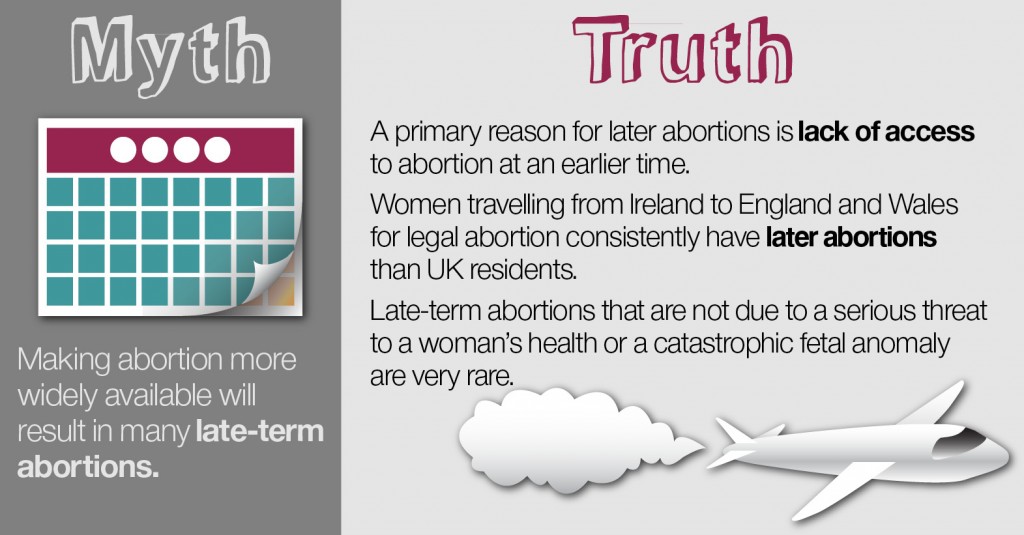 Welcome to Day 5 of ‘8 Days-8 Reasons to Repeal the 8th’ where each day running to International Women’s Day, Abortion Rights Campaign we will be busting 1 common myth about abortion in Ireland. So check back here for tomorrow’s myth and tweet your own at us @freesafelegal and using #RepealThe8th

Truth #5: Where abortion is prohibited or difficult to access, the chances are higher for late-term abortions to occur.

It’s important first of all to clarify what we mean when we talk about ‘late-term’ or ‘later-term’ abortions. Indeed there’s no absolute medical consensus on what constitutes a late-term abortion. Some categorise abortions at, for example, sixteen weeks’ gestation as late-term, even though this is many weeks before any possibility of viability. Indeed fetal viability is often invoked in debate surrounding the designation ‘late-term’. However, the chances of viability are unique to each pregnancy and subject to a whole host of variables, so we’re still faced with a blurred line.

Two other very important questions: who and why? Who are the women who seek late-term abortions? And why do they seek them? If we don’t listen to the women in these situations, it goes without saying that we will likely never understand their decisions.

A survey conducted in the United States in the late 1980s among women seeking late-term abortions found that 48% of them had found it difficult to make arrangements for an earlier abortion. A study last year confirmed that difficulties in accessing abortion are still a primary reason for women seeking later-term abortions. It also found that legislative restrictions on abortion disproportionately affect young women and women with limited financial resources. In other words, later-term abortions are sought where earlier-term abortions are unavailable or difficult to access. This shows a counterproductive hypocrisy at the heart of ongoing efforts by the Republican Party and anti-choice campaigners in the US to chip away at Roe v. Wade (the Supreme Court decision that legalised abortion in the US) with unnecessary and unjustifiable state restrictions on abortion. Such restrictions are actually a prime reason for the occurrence of later-term abortions as women are compelled to scrimp and save and travel across vast swathes of the US for abortion access.

Ireland’s case is similar. An Irish Times front-page article last year revealed that women travelling from Ireland to England and Wales for abortion services are consistently more likely than UK residents to undergo the procedure at a later fetal gestational age. This increased proportion of later-term abortions among women arriving from Ireland is hardly surprising. Women in Ireland who are compelled to travel overseas to access safe, legal abortion services must arrange travel, accommodation, the procedure itself, time off work, childcare, etc., and save the money required for these arrangements. This takes time, particularly for less well off women. This fact, as in the case of the US, underscores a fundamental futility and hypocrisy in Ireland’s abortion laws and the vain anti-choice drive to ‘keep Ireland abortion-free’: the Irish solution to abortion, far from reducing the abortion rate, results in all likelihood in an increase in later-term abortions.

Now, let’s take a look at the numbers. Take our closest neighbours and most significant proxy reproductive rights providers: in England and Wales only 2% of abortions in 2012 occurred at or over 20 weeks’ gestation. An abortion at 20 weeks, roughly halfway through the second trimester and still before any possibility of viability, most likely wouldn’t even constitute a late-term abortion in most people’s eyes. Incidentally, many of the most catastrophic fetal anomalies can’t be diagnosed before 20 weeks’ gestation. This alone shows the unworkability and injustice of bans on late-term abortions. In short, late-term abortions are rare; late-term abortions not performed due to a threat to the woman’s life, a serious threat to her health or a fatal fetal abnormality are exceptionally rare and likely chosen or necessary due to other difficult circumstances.

The decision whether or not to have an abortion should be left to the woman’s own conscience, in consultation with her health-care providers. Late-term abortions are no exception.

‘As early as possible, as late as necessary,’ goes a popular pro-choice maxim. The Abortion Rights Campaign works to try to make both parts of that maxim a reality.

For further insight into the women who seek late-term abortions and the medical teams who provide them, see Martha Shane and Lana Wilson’s documentary film After Tiller.