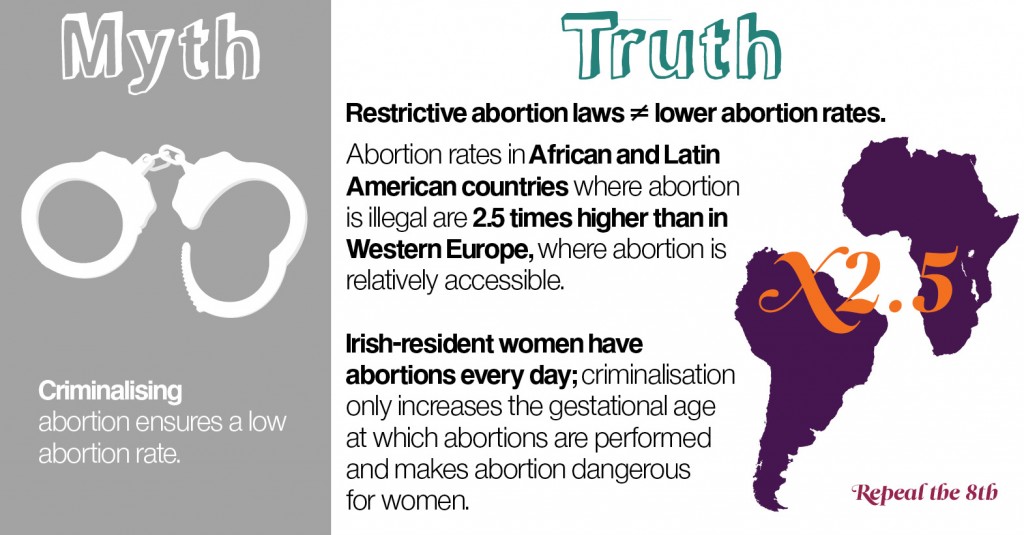 Welcome to Day 3 of ‘8 Days-8 Reasons to Repeal the 8th’ where each day running to International Women’s Day, Abortion Rights Campaign we will be busting 1 common myth about abortion in Ireland. So check back here for tomorrow’s myth and tweet your own at us @freesafelegal and using #RepealThe8th

Truth #3: Women have abortions regardless of whether the procedure is legal, and restrictions just make abortions less safe.

Women have always sought and chosen abortion, regardless of its legal status, sometimes with tragic results. In Ireland’s darker days many had recourse to backstreet abortion providers. Birth concealment and infanticide were also common in Ireland before sexual health education, contraception and abortion (by way of the stopgap of England and Wales) became more easily accessible.

Assuming that is a goal, what does lower abortion rates then, if not legislative restrictions and criminalisation?

Measures that are preventative as opposed to punitive contribute to reducing the rate of unintended pregnancies and, concomitantly, the abortion rate. Two prime examples are widespread access to affordable or free contraception, including emergency contraception, and comprehensive, unbiased sex education in schools at an appropriately early age.[1] These form part and parcel of a pro-choice vision of reproductive rights and sexual health awareness.

Ironically, many of the most vociferously anti-abortion groups and individuals also oppose these very measures that are proven to lower the abortion rate.

Women in poverty are significantly overrepresented among abortion patients. It follows that the provision of resources that create an environment in which it will be easier for a woman to decide to take a pregnancy to term also contribute to reducing the abortion rate: (compulsory) maternity and paternity leave and benefits; affordable or free public childcare; cash grants and tax benefits for women with dependent children; affordable or free postnatal health care; and flexibility with regard to flexitime and other job-sharing and part-time work arrangements.

If criminalising and restricting access to abortion doesn’t reduce the abortion rate, what does it do?

As we’ll find out further on in this series, legislative restrictions on abortion correlate with abortions being performed at later gestational ages partly because of delays incurred by the necessity of travel. Such restrictions also increase the percentage of unsafe abortions. In 2008, the most recent year for which the World Health Organization has published the numbers, unsafe abortions accounted for 13% of maternal deaths globally: 47,000 deaths.

This is where England and Wales come to Ireland’s rescue. And this is what makes Ireland’s near-total abortion ban such a hypocrisy and such an insult to women: it’s primarily symbolic. Abortion is available to women in Ireland—either illegally on home soil or legally across the sea. The Eighth Amendment merely makes it difficult for well-off women to access safe, legal abortion and even more difficult for less well-off women.

Our laws should keep us healthy and happy, not tow the line of a noisy minority. Criminalising abortion doesn’t stop abortion. It stops women.