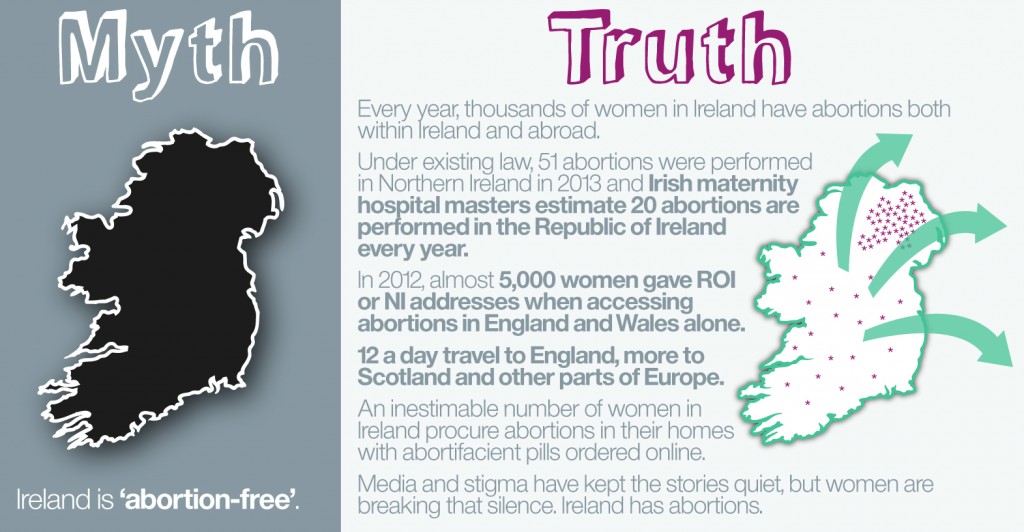 Each day starting today and running to International Women’s Day, Abortion Rights Campaign will be busting 1 common myth about abortion in Ireland. So check back here for tomorrow’s myth and tweet your own at us @freesafelegal and using #RepealThe8th

In partnership with Alliance for Choice Belfast, we bring you:

Truth #1 Ireland is not, never has been, and never will be abortion-free.

Firstly, abortions are sometimes performed legally across the island of Ireland where the woman’s life is in obvious and immediate danger. (Many anti-choice semantic magicians choose not to call abortions in these cases abortions, but that’s a myth for another day.) However, the paper-thin distinction between risk to health and risk to life in Irish abortion law can leave doctors’ hands tied when treating complications in pregnancy. Long-term or permanent risk to the pregnant woman’s physical or mental health can also be grounds for legal abortion in Northern Ireland. 51 abortions were performed legally in Northern Ireland in 2013. It’s not known how many legal abortions are performed in the Republic of Ireland where there the woman’s life is threatened by her pregnancy. Master of the National Maternity Hospital Dr Rhona Mahony’s estimate is ten to 20 per year; Master of the Rotunda Hospital Dr Sam Coulter Smith reckons 20 to 30 terminations are performed.

Secondly, Ireland’s near-total abortion ban, far from stopping Irish-resident women having abortions, has instead compelled well over 150,000 to travel overseas for safe, legal abortions since 1980. In 2012 alone 3,982 women gave ROI addresses and 905 gave NI addresses when accessing abortions in England and Wales.[4] And these are only the ones we can count. Many more women provide UK addresses at which they are not resident; provide no address at all; or travel to Scotland, the Netherlands or further afield to have abortions. All in all, it’s estimated that at least twelve women leave Ireland every day to access safe, legal abortion services overseas. While these abortions are not performed on Irish soil, the women seeking them are from and/or living in Ireland.

Thirdly, an inestimable number of women in Ireland now illegally procure abortions in their homes with abortifacient pills ordered online. In 2009 alone Irish Customs seized in excess of 1,200 such tablets. The number of pills seized has fallen in recent years, possibly due to easier access to emergency contraception. (Hint, hint, anti-choicers.) Nonetheless, these figures still probably represent only the tip of the iceberg of the true volume of such pills being imported by people in Ireland: many packages are successfully delivered.