I’m Marching for a Better Future by Caoimhe Doyle 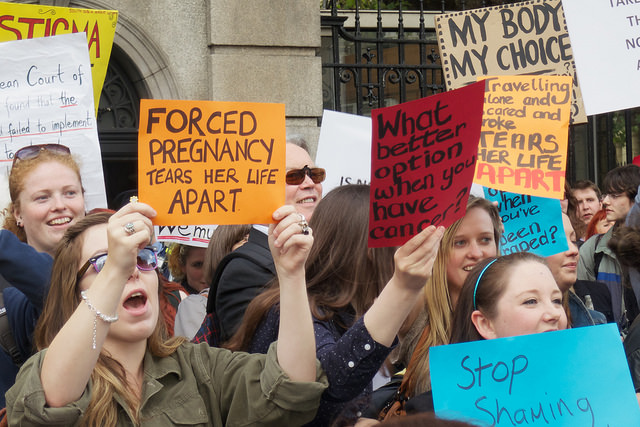 Shortly before she died, my grandmother told me that she became pregnant with my mother almost immediately after she got married, and spent much of her pregnancy in fear that she would give birth early. A woman up the road, she said, had given birth 8 months and 3 weeks after her wedding – everyone on the street had been counting the days and she was the talk of the community for years afterwards. To my grandmother’s relief she gave birth 9 months and 3 days after her wedding and so was spared living the rest of her life with the shame and stigma attached to even the suspicion of sex outside marriage.

This is the Ireland my mother was raised in. A country where even women who did everything “right” could still be shamed and ostracised for circumstances completely outside of their control. A country perversely obsessed with female sexuality. An Ireland where “fallen women” were sent to Magdalene Laundries, their only crime having sex (with men whose social standing, much less their freedom, would remain mostly unaffected) or even being raped. An Ireland where condoms were illegal, married women couldn’t work, and women’s right to equal pay came in only because the EU stepped in to demand it. Abortion was criminal under the Offences against the Person Act 1861.

The Ireland I was born into in 1990 was in some ways much the same, though public opinion on sex and social issues had changed. When legal change did come much of it came quickly: In 1992 condoms became widely available, homosexuality was legalised in 1993, divorce was legalised and the last Magdalene Laundry closed in 1996. However abortion was, if possible, even more illegal than it had been in the 1950s. The 8th Amendment, passed in 1983, equated the life of a pregnant woman with the life of a foetus. My mother carried 2 pregnancies under the rule of this Amendment and was told when she was pregnant with me that if she encountered any problems she should leave the country for treatment because doctors in Ireland – given the choice between the foetus and her life – would let her die every time.

I’m too young to remember the X-case, and other cases like A, B C vs Ireland and Miss D did not really enter my small media/social sphere and were certainly not talked about in school or at home. By default most of my friends and I were raised “pro-life” – not that we were really fed any specific propaganda or even overtly spoken to about abortion, it was just considered the norm. By about 15 or 16 most of our opinions had gradually shifted to “Well, I wouldn’t get an abortion but we shouldn’t stop anyone who wants one.” Having been raised by Catholic schools and parents that is a pretty progressive view to arrive at. But still, abortion as an issue didn’t matter to me so much – it was something that happened in the abstract. I was living in Spain at the time of the infamous Youth Defence billboard campaign. When I returned Ireland that summer it seemed young women, in particular, had been awoken to the complete bullshit of our regressive abortion laws. We had kind of forgotten, or maybe just accepted, that we lived in a country that didn’t see our bodies as our own. Women who had had abortions were shamed into silence and secrecy and those who wanted to speak out were not given a platform to do so. In the enforced oppressive silence we had abandoned these women and somehow convinced ourselves that it wasn’t all that bad. But the Youth Defence billboards, while trying to raise support for the “pro-life” position had actually had the opposite effect, and opinions were changing.

That September I attended the first ever March for Choice. I went on my own, and it felt empowering to march in a group of people that shared my values – women who no longer wanted to feel ashamed and people who no longer wanted to live in a country that shamed them. Later that year as the abortion debate raged in my college between the newly formed Fem Soc and a small number of pro-life students, a representative from Youth Defence was invited to speak. He spoke to us about “foetal pain,” he showed us videos with ominous music about the evils of the “abortion industry,” – I don’t remember the details. What I do remember is the constant simmer of rage I felt throughout the hour-long talk. How dare this man stand in front of a room of women, peddling lies in an attempt to control what we can do with our bodies? I left that room shaking with rage. Later that evening the news of Savita Halappanavar’s death broke.