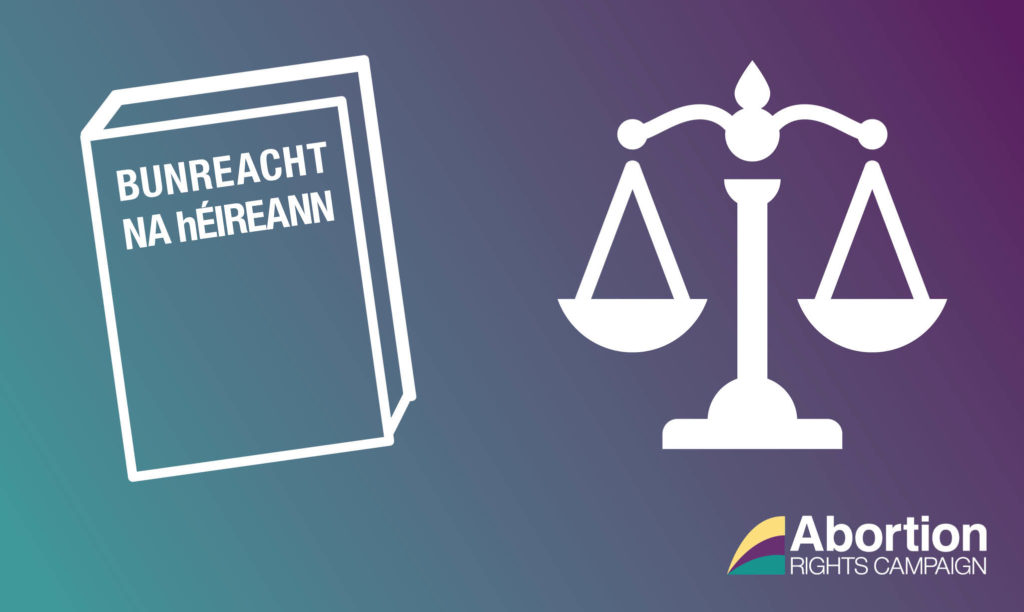 We all know that removing the 8th Amendment is our goal this spring, but have you ever wondered what a constitutional amendment actually is, and how it differs from other laws? We have answers! In this blog post we outline exactly that, with a specific focus on how all this relates to abortion provision in Ireland.

What is the Constitution?

The Constitution of Ireland (Bunreacht na hÉireann, 1937) sets out how Ireland should be governed through a series of 50 articles. The constitution is superior to all other law, which means that if a piece of legislation is written that goes against the constitution, it cannot be made into law.

As the country grows and progresses, the citizens of Ireland can make changes to our constitution (called amendments) by holding a referendum. For example, the result of the Marriage Equality referendum in May 2015 was that the people of Ireland added the 34th Amendment to the constitution to permit marriage to be contracted without distinction as to a person’s sex.

Unlike the constitution, legislation is the set of laws written and passed by the Oireachtas. The Oireachtas consists of Dáil Eireann (TDs), Seanad Eireann (Senators) and the President. A new law starts life as a bill, which must be passed by both the members of the Dail and the Seanad. The President must be satisfied the new law is not in conflict with the constitution, and then it can be signed into law.

There can be a delay between a change in the constitution and the accompanying legislation. For example, even though we voted in favour of Marriage Equality in May 2015, the Oireachtas did not pass legislation until October 2015. Once the Marriage Act of 2015 passed, the first same sex couple was able to lawfully marry in Ireland.

Do all laws come from the articles of the Constitution?

This does not mean we have no input into our laws. We vote for politicians to represent our interests, and many people contacted their TDs and Senators to let them know they wanted this ban removed. Due to this public support, the Oireachtas took steps to change the legislation.

Abortion and the Constitution:

The 8th Amendment, or Article 40.3.3 was inserted into the constitution after a referendum vote in 1983. Abortion was already illegal under existing legislation, but the 8th Amendment meant that no law could could be made by the Oireachtas that allowed abortion in Ireland.

The text of the amendment is:

This is a total ban on abortion, except in the cases where a woman’s life is in immediate danger because of her pregnancy. It has also been interpreted to mean that the State can overrule a woman’s decisions in pregnancy and birth. This can and does result in court injunctions being brought against birthing mothers to force them to give birth in a hospital or by caesarean section.

In 2013, the Protection of Life During Pregnancy Act (PLDPA) was passed by the Oireachtas. This legislates for the limited cases where a pregnant person has a constitutional right to access abortion. Under the PLDPA, abortion is legal if the pregnancy poses a serious risk to the life, as distinct from the health, of the pregnant woman. In any other circumstance, abortion is illegal and is subject to a 14 year prison sentence. About 25 abortions are carried out in Irish hospitals every year under the PLDPA. Despite this legal restriction, approximately 2,000 women a year access safe but illegal abortion pills, which are unregulated under Irish medical services.

Most people agree that this law is far too restrictive, but due to the 8th Amendment in the constitution, it would be impossible for the Oireachtas to change our abortion laws to bring us into line with international human rights law, or medical best practice. The only way for the Oireachtas to be able to broaden access in any way is for the electorate to first vote to remove the 8th Amendment from our constitution in the upcoming referendum.

So there you have it. We must remove the 8th Amendment from the Irish Constitution so the Oireachtas can enact legislation to allow for regulated abortion, as recommended by the Joint Oireachtas Committee. Without repealing the 8th Amendment, the Oireachtas has little power to improve Irish abortion law. That is why people from every community in Ireland are coming Together For Yes to call for more progressive, compassionate laws about abortion this year. In our next post, we will explore in more depth what will happen after we vote Yes to remove the 8th Amendment.