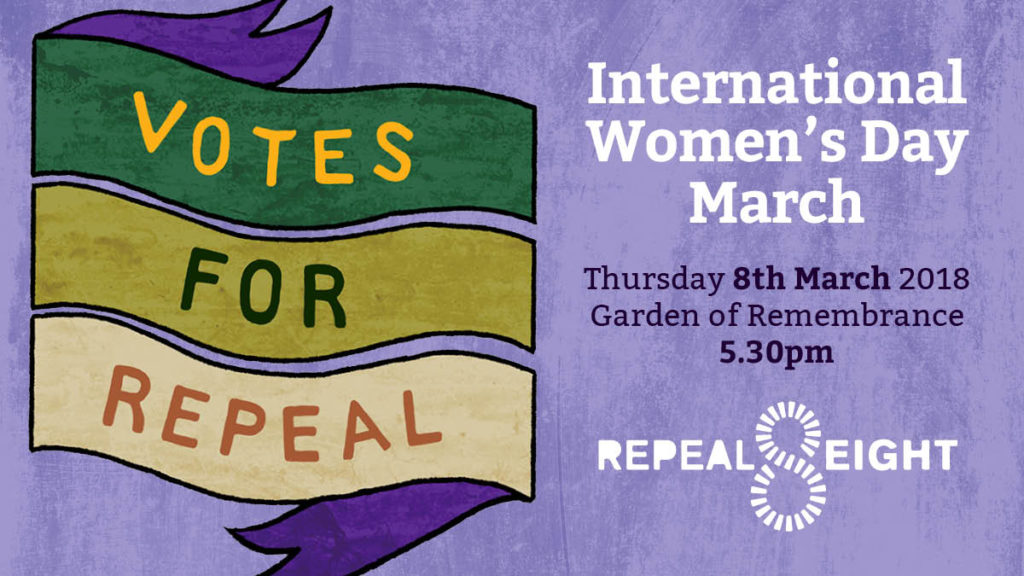 International Women’s Day takes place on March 8 every year. It is a global day celebrating the social, economic, cultural and political achievements of women. With the referendum coming up, this is set to be a historic International Women’s day in Ireland – events are happening across the country so get involved and make your voice heard!

In 1918, women fighting for their right to vote shouted: “Votes for Women”. In 2018, as we begin the campaign for the right of women living in Ireland to make decisions about their own bodies, we shout: “Votes for Repeal.” Full details here

Join the UCDSU Gender Equality Committee’s International Women’s Day Rally. In collaboration with UCD for Choice, the event will occur in anticipation of the ‘Votes for Repeal March’ at 5:30pm in the Garden of Remembrance. Full details here.

When: March 8, 11AM
Where: NCAD Student’s Union

A Different Perspective: The Lives and Struggles of Working Women

When: March 8, 8PM-11PM
Where: The Liquor Rooms, 5 Wellington Quay, Dublin

This event wishes to showcase the endurance of contemporary socialist-feminist activism, and the continued relevance of International Working Women’s Day. Full details here.

This is a solidarity action organized by Alliance for Choice. Full details here.

Alliance for Choice at the International Women’s Day Rally

Gather in Writers Square from 11am for face painting, balloons, singing and dancing. The Rally is family friendly. Then join the parade to the City Hall to hear some very inspirational women. Full details here.

Join in making aprons, banners and sandwich boards with slogans old and new. Materials will be provided. There will also be some wine, snacks and powerful playlists. Full details here

Gather at lunchtime outside the City Library on Grand Parade for a march and rally in support of Repeal. Full details here.

All funds raised will go towards the upcoming referendum campaign. There will be a choice of pre-drawn, feminist inspired designs to choose from. Full details here.

Rebels for Repeal have teamed up with Everyday Stories, this time especially for International Women’s Day! Upstairs in the Friary we will play audio recordings of three Irish women’s abortion stories and have an open discussion of them afterwards. Full details here.

Assemble from 6pm in Eyre Square for a number of speeches along with artistic support by Ann Marie Hynes. The march through the streets will end up at the Magdalene memorial on Forster Street. Full details here.

The motion to be debated is “This house would legalise abortion on request in the first 12 weeks of pregnancy”. Full details here

When: March 8, 8PM
Where: The Cellar Bar, Galway

€5 per head / tables of up to 4. All questions will be women themed.  There will be a women in history round, women in politics, women in sport, women in media. Full details here.

Stand in Solidarity with the 12+ pregnant people who every day travel to the UK and Europe to access basic healthcare and the 5+ pregnant people who potentially face a 14-year prison sentence for accessing abortion pills online. There will be empowering feminist speakers, poetry and moments of silence.  Full details here.

Gather at Bedford Row for a silent demonstration in solidarity with the 99 people who gave a Limerick address when they travelled overseas to get an abortion in 2016. Full details here.

On the Bridge with Micheline Sheehy Skeffington, local historian Ciara Carew, Margaretta D’arcy, Sharon Murphy and Donnah Sibanda Vuma. After the Bridge there will be more discussion and some finger food in The Rowan Tree. Full details here.

Come to the official Offaly for Choice launch, there will be a number of speakers setting out their reasons to vote repeal. Full details here.

“Three Billboards For Choice” will be displayed in different locations around Sligo town to encourage a discussion about why you should vote YES to Abortion Rights in the upcoming referendum. Full details here.

Raise money for our local pro-choice group! Win great prizes from lots of local businesses here in Gorey and a raffle on the night too! €20 table of 4 Book your table now by calling Lauren @ 0851009497. Full details here.

Bridging the Gaps: Celebrating a Century of Women Activists

Leitrim Abortion Rights will create a human bridge along the Cumann na mBan footbridge to commemorate extraordinary Irish women who have changed the world, joining hands across the Shannon from Leitrim to Roscommon. Full details here.