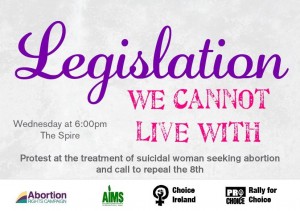 Voices for Choice Unite this Wednesday 20th August at 6:00 pm at the Spire on O’Connell Street, Dublin! Abortion Rights Campaign,Choice Ireland, Rally For Choice Ireland, ROSA –  for Reproductive rights, against Oppression, Sexism and Austerity, Real-Productive Health and Aims Ireland have jointly called this protest to demonstrate against the horrendous treatment of a rape survivor, who became pregnant and suicidal and was subsequently denied an abortion under the new law. This is legislation we cannot live with and we are calling for the repeal of the 8th amendment to the Constitution in order to allow free, safe, and legal abortion on request.

There will be protests taking place at the same time in Belfast & Derry,Cork, Galway, Berlin & London.