June 8, 2015 - Media, Policy & Advocacy - Tagged: #CESCR, #UNIRL - no comments
Members of the Abortion Rights Campaign (ARC) travelled to Geneva today to bring the voice of Ireland’s pro-choice activists and individuals to the attention of the UN Committee on Economic, Social and Cultural Rights over the next two days. 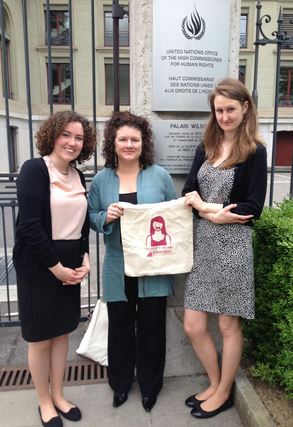 Working in coalition with civil society partners, ARC will provide expert evidence to focus international concern on Ireland’s restrictive abortion regime, which continues to violate the most basic human rights of women and girls, including their rights to health and life.
As economic rights are a key focus of the committee, ARC will emphasise the inequitable access to abortion services resulting from the so-called “right” to travel. From the grass-roots speak-outs we host, where women tell their abortion stories in their own words, we consistently hear women recall insurmountable barriers to travel- including the cost of having an abortion abroad, the impossibility of obtaining visas to travel, or the difficulty of arranging childcare or time off work. The situation created by this so-called ‘right’ actively discriminates against women and girls who are already marginalised.
Following on from its written submission to the Committee on Economic, Social and Cultural Rights, ARC called for the Irish government to decriminalise abortion, and ensure equitable and practicable access to abortion services within Ireland, thereby ending the legal and constitutional quagmire that has failed women in Ireland for so long.
While the current Government continues to refuse to hold a referendum to repeal the Constitutional ban on abortion, international human rights mechanisms are critical to ensuring the State is held accountable for its continued de-prioritisation of women’s and girls’ health and human rights.
We know that the Irish Government has a history of avoiding its duty of care to specific groups of people, and that international concern and solidarity is vital in supporting grass-roots activists who are working on the ground in Ireland, continually pushing for discriminatory legal and constitutional provisions to be urgently reviewed and revised.
You can read ARC’s written submission on the United Nation’s here.
Maeve Taylor, Senior Policy and Advocacy Officer, Irish Family Planning Association, delivered this statement to the United Nations Committee On Economic, Social and Cultural Rights on behalf of ARC and a number of other organisations.