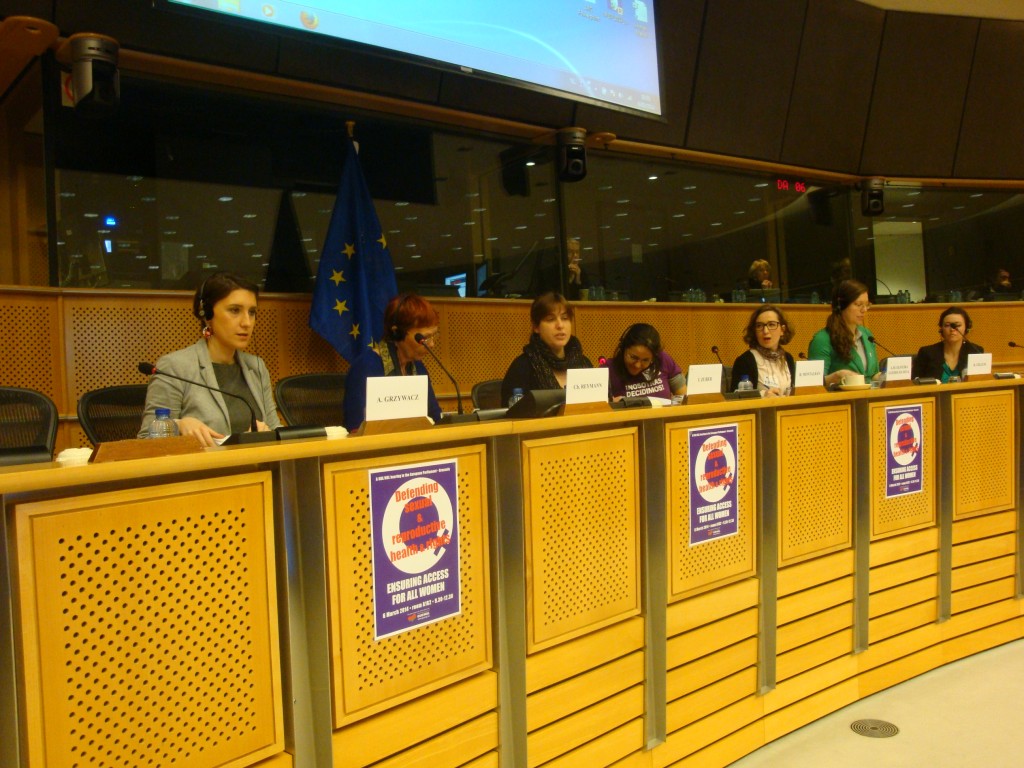 The GUE/NGL grouping held hearings on Thursday in the European Parliament on sexual and reproductive health and rights. The Abortion Rights Campaign gave a speech campaigning for full reproductive rights, using the opportunity to highlight at a European level the grave consequences the Eighth Amendment to the Irish Constitution has for reproductive rights and maternity services in Ireland.

Introduced by referendum in 1983, the Eighth Amendment equates a pregnant woman’s life with that of an embryo or foetus. Until it is removed, there can be no progressive legislation on abortion beyond the narrow terms of the X case and, arguably, in cases of fatal foetal abnormalities. Even after the passing of last year’s Protection of Life During Pregnancy Act, Ireland still has, along with Malta, the most restrictive and punitive abortion laws in Europe. But the reality of abortion in Ireland is that the Eighth Amendment is simply not fit for purpose. It does not stop women from terminating pregnancies; it only serves to make the journey much more difficult. Every single day women travel abroad to access abortion. Others self-administer abortions at home with pills ordered from reputable websites such as Women on Web. If caught, these women could face up to 14 years in prison under last year’s abortion legislation.

Opinion polls have consistently indicated that public attitudes to abortion do not support the imposition of such onerous penalties on women who end pregnancies. Since 1980 over 150,000 women have left the country in order to access abortion, while unknown numbers have found the means to end their pregnancies in Ireland. Do citizens really believe these women should be imprisoned? As much as anti-abortion organisations try to perpetuate shame and stigma around abortion, most reasonable people do not want to see their friends, sisters or partners behind bars because they terminated a pregnancy.

In the run-up to International Women’s Day, the Abortion Rights Campaign is running a social media campaign dispelling some of the more common myths and medical disinformation promulgated by some anti-abortion campaigners in Ireland and internationally. The aim of this initiative is to spread public awareness about the reality of abortion: criminalising abortion does not result in lower abortion rates; safe, legal abortion does not cause infertility or mental health problems; legalising abortion will not result in its use as a method of birth control. We need a frank and open discussion about reproductive rights, one which is based on facts and evidence and the realities of women’s lives.

After 20 years of delay and avoidance, it was a European Court of Human Rights ruling that forced the Irish Government to legislate for the limited constitutional right to abortion arising from the X case. Ireland’s restrictive abortion laws have been criticised time and time again by internationally recognised human rights authorities such as the UN Human Rights Committee and the UN Committee on the Elimination of Discrimination Against Women. Towards the end of last year three women who terminated wanted pregnancies because of fatal foetal abnormalities lodged three separate petitions with the United Nations. They argue that their being forced to travel abroad to end their pregnancies amounted to cruel, inhuman or degrading treatment, a violation of the United Nations Convention against Torture.

Must we wait for another international human rights body to tell us what we already know? The Eighth Amendment must be repealed, by referendum, in order to allow access to free, safe and legal abortion in Ireland upon request. This would at last bring us into line with the vast majority of our European counterparts and end the absurd hypocrisy of Ireland’s abortion laws. With International Women’s Day approaching, it is time to remind ourselves that although women’s rights in Ireland have come a long way, we are still fighting for the most basic level of female bodily autonomy—the right to choose.

Alison Spillane is a member of the Abortion Rights Campaign. For more information on the ‘8 Days – 8 Myths – 8 Reasons to Repeal the 8th’ initiative, see www.repealthe8th.ie