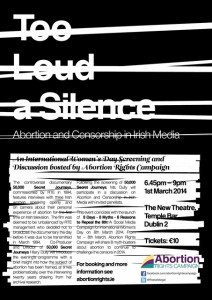 The Abortion Rights Campaign will host Too Loud a Silence: Abortion and Censorship in Irish Media – a screening of the controversial documentary 50,000 Secret Journeys followed by a panel discussion on the treatment of abortion in the Irish media with film Director Hilary Dully, journalist Colette Browne, and several women who have publicly shared stories of their abortions. The event takes place on 1st of March at 6:45 at the New Theatre.

In 1994 RTÉ commissioned 50,000 Secret Journeys, a documentary featuring interviews with three Irish women speaking openly and on camera about their personal experience of abortion.  Once complete, the film, which would have been the first representation of abortion experiences on Irish television, was deemed to be ‘unbalanced’ by RTÉ management, who decided not to broadcast the documentary the day before it was due to be transmitted in March 1994.

Twenty years later we’re facing the same problems, so on Saturday the 1st of March, Director of 50,000 Secret Journeys Hilary Dully will provide insight into how the subject of abortion has been framed, at times problematically, over the intervening twenty years, drawing from her archival research. Hilary Dully said “Statistics don’t board planes, women do.  We don’t put a face to these women unless it is the face of our daughter, our mother, our friend, our own.  It is a missing narrative, a story that needs it’s own language.”

Says Katie Power of the Abortion Rights Campaign, “Two weeks ago, Janet Ní Shúilleabháin of ARC took to twitter to share her experience of travel to the UK for an abortion as a young woman. The story has since been covered in 10 news articles across 5 different countries and in 4 different languages. In Ireland however, her courageous act has been covered by a single radio programme. With over 154,000 women who have travelled to seek abortion, there are as many stories, but we do not see them, we cannot hear them. The twentieth anniversary of the censoring of 50,000 Secret Journeys brings to light just how silent Irish media have been in sharing abortion stories over the decades. While there has been ample coverage of political discourse from “both sides” of the debate, women’s stories are left out. We can’t wait another twenty years to hear what more than 12 women are experiencing everyday.”

At Too Loud a Silence, ARC and partners will launch an 8 day online campaign leading up to International Women’s day. ‘8 Days – 8 Myths – 8 Reasons to Repeal the 8th” will run from 1st-8th March. Each day a new infographic and blog post will be shared to challenge the false and dangerous information often promoted as fact by anti-abortion organisations.

Sinead Corcoran of the Abortion Rights Campaign said  “The ‘8 Days to Repeal the 8th’ campaign aims to promote truth and fact about abortion. Anti-abortion groups often espouse dangerous misinformation which promotes fear, stigma and shame and pushes women in Ireland further away from accessing vital medical services and supports in times of crisis. We want to promote open honest discussion about abortion, empowering women to make their own decisions when it comes to their own body and health. A vital first step towards real reproductive rights and health in Ireland is the repeal of the 8th Amendment.”