Abortion, Ireland & Human Rights – What? Who? How? 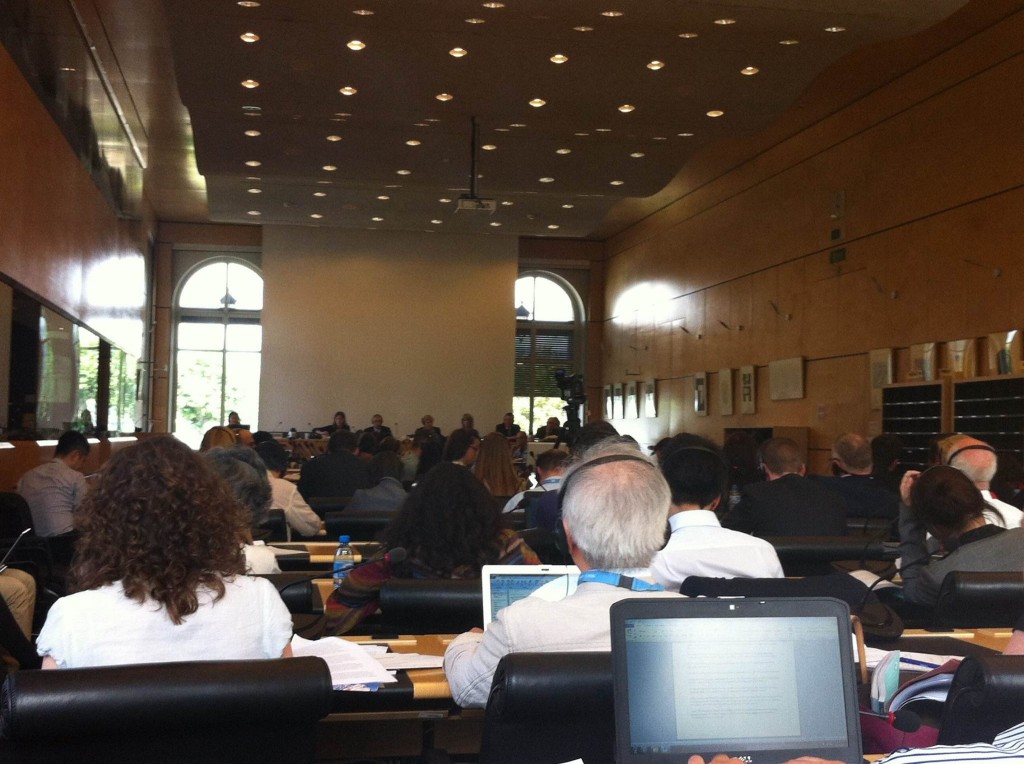 This week, the Abortion Rights Campaign contributed to a joint statement, sent representatives, and delivered an address to the UN Human Rights Committee to highlight the inaction of the Irish State on abortion. It was a high-profile opportunity to raise awareness about Article 40.3.3° as direct discrimination against women in Ireland, especially for women who are unable to travel due to financial, health, or other limitations.

While we know that there are ways to interpret health regulations and laws that would allow further access to abortion even with the Eighth Amendment in place, the State has routinely made it clear that they interpret the Amendment as a means to avoid the costs of funding women to access abortion and also to use the threat of a fourteen-year prison sentence to deter what we know to be undeterrable. As women will always need access to abortion in Ireland or any country, the ‘ignore-it-til-it-goes-away’ attitude of the State while talking about reducing the numbers of abortions and providing after-abortion care is especially galling.  As a campaign we look for opportunities that require the Irish State to acknowledge the duty of care that it owes its citizens who need that access.

In sending representatives to the UN this week, ARC seized the opportunity to highlight the hypocrisy of the Irish State, a state that accepts the need for abortion (in that women can travel), but refuses to accept the responsibility of care for its women by abdicating the provision of this service to neighbouring health services.

What was the ICCPR and all the conversation about?

The International Covenant on Civil and Political Rights is an international covenant that UN member states sign and must work to be compliant with. Essentially this was Ireland sitting its oral exams on human rights. Following Ireland’s last review (in 2008), the UN Human Rights Committee urged the State “to bring its abortion laws in line with the Covenant”.

The Abortion Rights Campaign was pleased and humbled to deliver the joint statement to the Committee during the NGO briefing. As a campaign working toward full free, safe, legal abortion and representing the rights-holders in Ireland, we are proud to work in partnership with the IFPA, Doctors for Choice and Terminations for Medical Reasons, together with the support of the Irish Council for Civil Liberties for the improvement of human rights, including reproductive rights, in Ireland.

On the first of the two days of proceedings on the 14th and 15th of July, Minister Fitzgerald and the Department of Health attempted to use Article 25 of the Covenant (which ensures the right to vote and participate in elections) as a bizarre defence of their inaction on abortion and their failure to meet Ireland’s obligations under Article 6 (right to life) and Article 7 (right to be free from cruel, inhuman or degrading treatment).

In a shockingly disingenuous statement, the State claimed that the Protection of Life During Pregnancy Act 2013 (PLDPA) represents the “will of the people”. The State delegation intentionally failed to mention to the Committee that the Irish people have never been given the opportunity to vote for broader abortion access. They also neglected to refer to opinion polls which consistently show that a significant majority support access to abortion beyond the narrow terms of the PLDPA.

This was just another example of the State pretending that ticking boxes and looking busy will quiet people down about abortion while not responding to a single issue raised by the Committee or NGOs. While the NGO delegation focusing on abortion was not surprised by much of what the Irish State said (save the use of the right to vote to defend the inaction on abortion), we were also far from impressed. So much so that later that evening, a member of the ARC Policy and Advocacy team discussed how inadequate the reply was with the Minister for Justice herself.

On the second day the Committee members displayed that they too were far from impressed about much of Ireland’s human rights record, specifically on abortion. Committee members Prof. Yuval Shany and Flinterman rejected the use of Article 25 of the Covenant as a reason not to comply with its obligations under Articles 6 & 7, which are non-derogable. Prof. Shany then went even further and asked the State to consider withdrawing its argument in this regard. The committee members raised questions about the inability of many women to travel, asserted that the woman’s right to life is fundamental (questioning directly and incredulously a thought system that would value a foetus over a woman), and emphasised that Ireland’s stance on abortion undermines the ‘very heart’ of international human rights legislation. Committee member Prof. Cornelis Flinterman asserted that “balancing” the right to life of a foetus against that of a woman is not a real human rights argument and that it “doesn’t do justice to the realities in which women find themselves”. He also asked whether people in Ireland have had a chance to remove the restrictions of the Eighth Amendment and whether the State has paid any attention to recent opinion polls showing a majority in favour of increased abortion access.

The State, all of its defences comprehensively demolished, had to backtrack and admit they have made no real efforts to meet the needs of women in Ireland, especially those whose health is at risk. Thanks to thorough questioning from the Committee, the State was forced to acknowledge that Ireland’s abortion laws discriminate against women who cannot afford to travel. This is a clear violation of Article 26 of the Covenant. In an embarrassing and shameful admission, the State told the Committee it had “no solution” for these women and then proceeded to say that hadn’t been challenged on this yet. In addition to this, Minister Frances Fitzgerald stated that a referendum on Article 40.3.3º would be required in order to bring Ireland’s abortion laws into line with international human rights norms.

What This Means for Abortion in Ireland

Is the Eighth Amendment what ties the Government’s hands on abortion or what they use as a shield? In the end it doesn’t matter because they’ve finally admitted that the Eighth Amendment is in contravention of the Covenant and cannot stand. This is a big step forward towards the introduction of free, safe, and legal abortion in Ireland. Having seen little in the way of a good faith effort on the part of the Irish State to actually propose a referendum to date, the fact that our message is endorsed by a respected international human rights body in challenging the Eighth Amendment is groundbreaking.

This week the Abortion Rights Campaign had an important opportunity to assert, defend and celebrate the right to abortion as a fundamental human right of people in Ireland. The UNHR Committee put it to the Irish State that they can no longer hide from the complexity of this issue or let women scrape together solutions to a problem that the State created for them in the first place. With the acknowledgement of discrimination of women by the Irish State that followed, now is the time for a new momentum on reproductive rights in Ireland. ARC believes it is time to speak up for abortion rights and to end the discrimination against women in Ireland. March with us on the March for Choice on September 27th and sign the petition to Repeal the Eighth Amendment.

Abortion Rights Campaign will host the 3rd Annual March for Choice on September 27th in Dublin and invite you to sign the petition to Repeal the Eighth Amendment.

We are indebted to and exhilarated by our new and ongoing partners in the effort and travels to Geneva: the Irish Family Planning Association, the Irish Council for Civil Liberties, Doctors for Choice, Termination for Medical Reasons and the Center for Reproductive Rights.