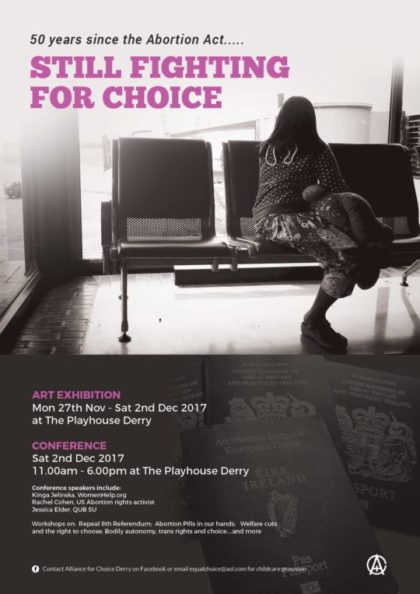 Hosted by Alliance for Choice Derry

It’s 50 years since the Abortion Act was passed in Britain and 20 years since a group of people got together in Derry to set up Alliance for Choice. Now, it’s 2017 and we are still fighting for choice.

This conference aims to give activists old and new a chance to discuss what activity we should initiate over the next year – and a chance to hear from some great speakers, local and international. Many of the issues we will be discussing were not on the agenda 20 years ago – like abortion pills that people can take at home to cause an abortion themselves, and the rights of Trans women.

Today, women in Northern Ireland can cause their own abortions using pills obtained over the internet and, since July 2017, abortions for women from here are available free on the NHS. Activists here now want a more up-to-date law than the 1967 Act….although we would be happy to accept it as a stop-gap measure….most importantly, we want to see abortion taken out of the criminal law and to be treated as the health care it is.