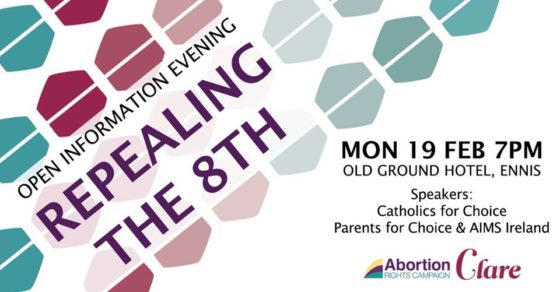 CFC was founded in 1973 to serve as a voice for Catholics who believe the Catholic tradition supports a woman’s moral and legal right to follow her conscience in matters of sexuality and reproductive health. CFC advocates for a world where abortion is safe, legal and truly accessible.

In a recent Irish Times article, Jon O’Brien wrote: “Irish Catholics stand by women and trust them to be moral agents of their own lives. It is important that Catholic voices be heard – because so many of us know in our hearts that repealing the Eighth Amendment is the right thing to do.”

Also speaking will be Jenni Owen Thomas of Parents for Choice in Pregnancy and Childbirth, who argue that people should become parents by choice, and not because they have no other option. Jenni will speak about how the 8th Amendment affects parents and families in Ireland.

Suzanne Leen and Michelle May from AIMS Ireland (Association for Improvements in the Maternity Services) will give a joint presentation about the adverse effects of the 8th Amendment on maternity services in Ireland. AIMS Ireland campaigns for and promotes informed choice and autonomy for women in all realms of maternal health.

A member of Abortion Rights Clare will update on the group’s first year of activity, and will look ahead to plans for campaigning in the run-up to the referendum in May/June to Repeal the 8th Amendment.

Finally, the discussion will be opened up to the floor during a Question & Answer session. We look forward to seeing you there. Please help us spread the word!